March 11, 2011
After such a busy week, it is always pleasant to sit down, relax, and look at the world around you. This week certainly has been one of them- universities have started to place out their results to eager senior students, Redondo Beach has a sardine clean-up to deal with, and Japan devastatingly has had a 8.9 magnitude earthquake. Here's hoping that Japan will recover quickly so that they can resume their daily lives again.

With times like these, it would be great to grab a breather and just enjoy the world and what you have and simply reflect. This set of photos are a reflection of my Hong Kong trip in December. Three months later and with barely any progress on this series at all, I might be somewhat disappointed with my status on this series, but times are busy, and many people I can sympathize with right now. Relax and enjoy the pictures- I have enjoyed editing these pictures especially and I will let them speak more for themselves while I will provide you with some background commentary. :) 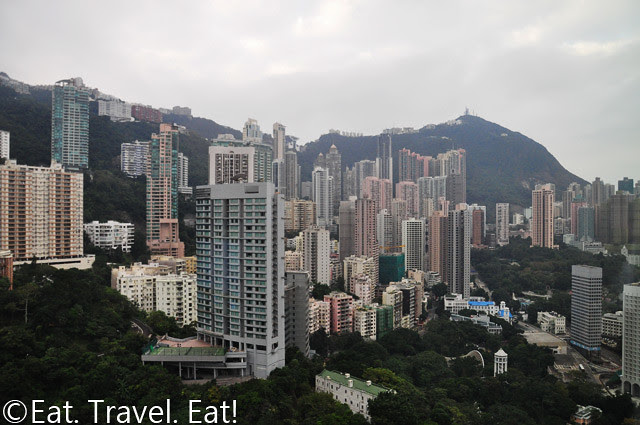 As you all may have read in the ultra-lengthy rooms post on Island Shangri-La, you will notice we had two types of rooms: a peak view room and a harbor (harbour) view room. The picture above is an overall peak view. Although I have seen this view so many times in my life already, it still is fascinating yet do this day. 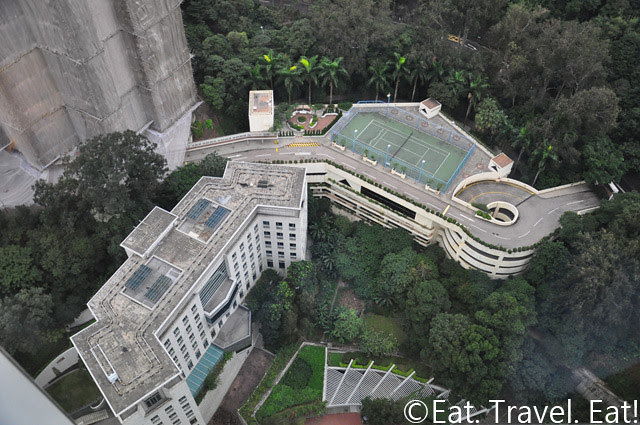 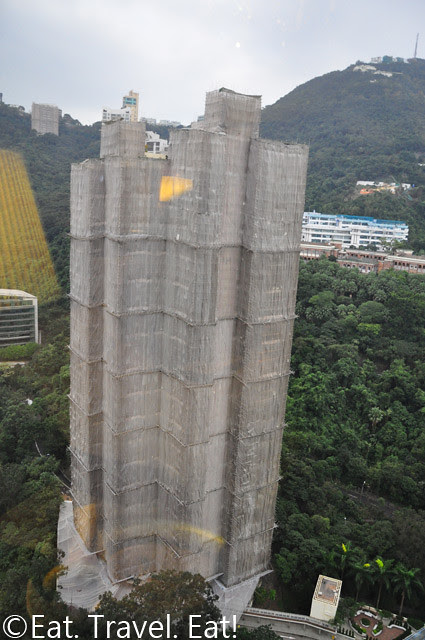 Although the view was certainly great, the first picture was only part of the story. With the eyes wandering straight out of the window, there was certainly a distraction to the picturesque view, mainly this building under renovation. This was also quite surprising- back a few years ago this netting usually was green, but this time we noticed most of the netting for buildings under construction or renovation were using white/grey netting. 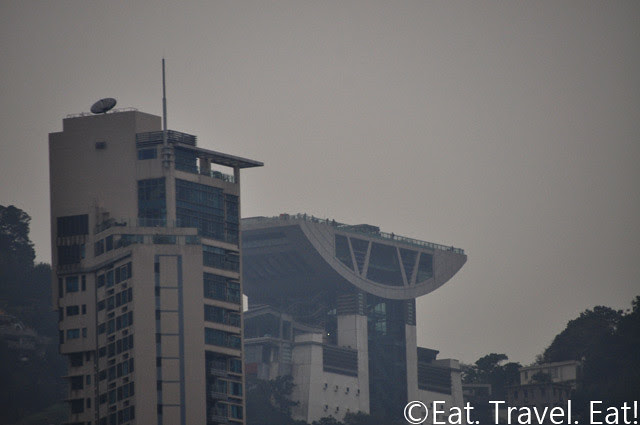 (compare where this is to the wider shot- that's the difference between 28mm and 450mm focal lengths!)
When I was little, I would always associate the "peak" view to The Peak, the building on which on the top looks like a bowl in this picture. I would think that the peak view was only named due to The Peak, but it is simply just the picturesque mountain view. 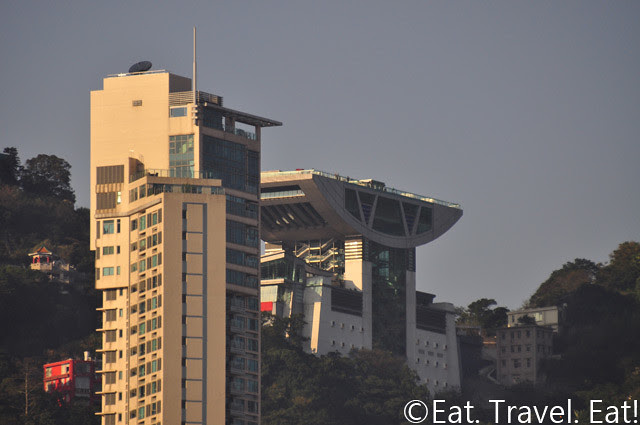 Different days brought different views and different lighting. Here was The Peak on a brighter, sunny morning glimmering in the daylight like the mansions and expensive houses perched along side it.

/*Side comment: Both of the peak pictures are notable by the way as being one of the first shots taken with my AF-S NIKKOR 28-300mm f/3.5-5.6G ED VR. It is a worthy investment to make if you have a Nikon D-SLR if you desire an all-in-one walk-around lens for FX format or even for DX format if you don't mind losing the wider end in one lens. I have to say, I really do enjoy it for my photography. It is very flexible and sharp if not a bit heavy due to its durability and plenty of distortion. Immediately it has helped me capture some moments that I would not have captured with my existing gear- which is certainly the best return on investment one can ever wish for.*/ 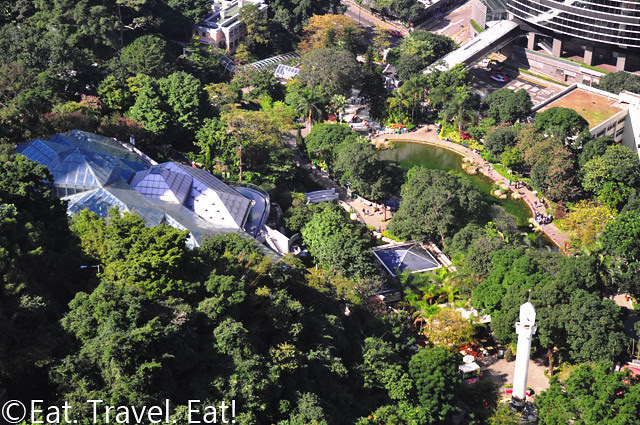 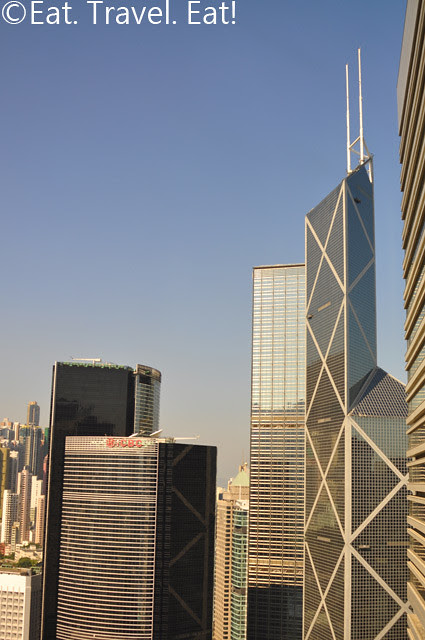 Elsewhere in Island Shangri-La, there were still picturesque views. The library had tall two-story windows which looking downwards gave a birds eye view of Hong Kong Park, while looking from a seat in the library provided a great view of the Hong Kong Island skyline. This view added to the quiet but elegant atmosphere of the library, making it a great place to read, study, or even surf the web.


With the harbor (harbour) view, one just needs to watch and be amazed. It is even better in person, as the scale and perspective feels even greater and larger. 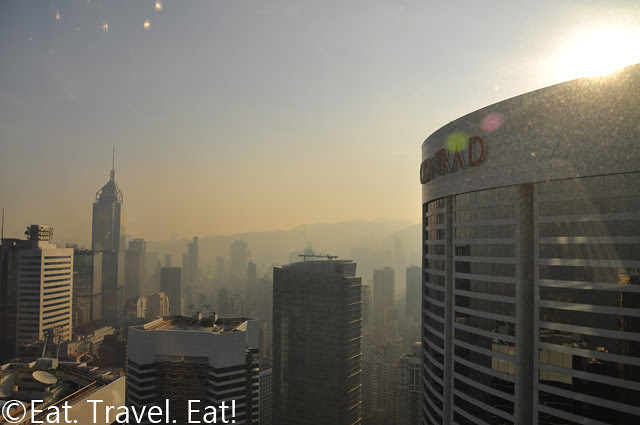 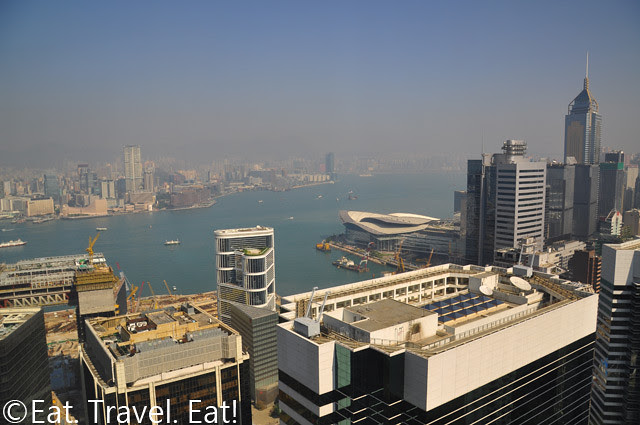 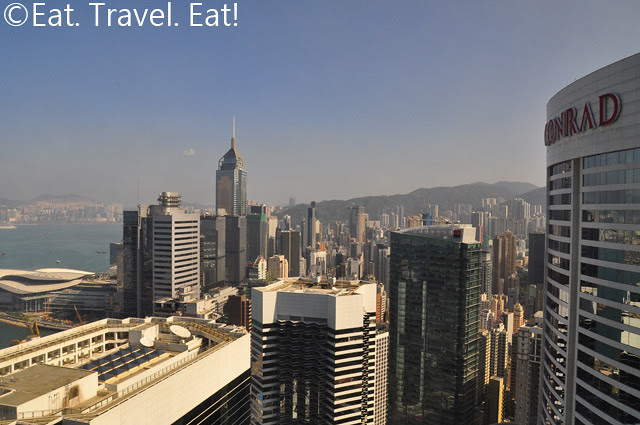 Every morning is the start of new opportunities, and waking up to the majestic harbour view from the Island Shangri-La was a great treat. To some of you readers, this view along with the extra room amenities just might make the 200-500 HKD upgrade (typically) seem a good return on investment. 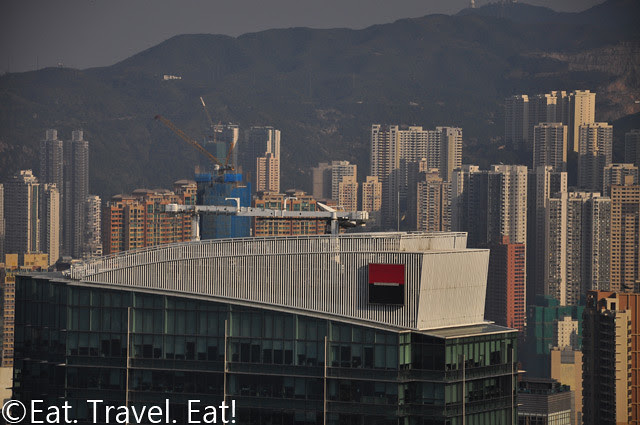 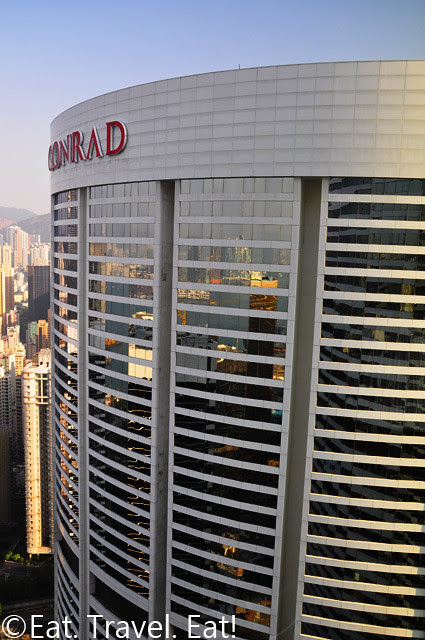 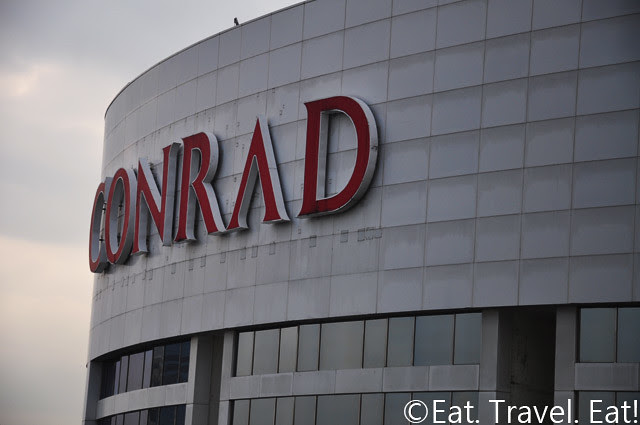 The buildings in Hong Kong have always fascinated me with their beauty and height; elsewhere, I look for more stunning buildings. These are just a few of the many buildings I'll highlight in this series.

And looking at the Conrad logo, you just might notice that the old logo has left its mark. Although "Conrad" replaces "Conrad International" the placement of the old logo still can be seen. 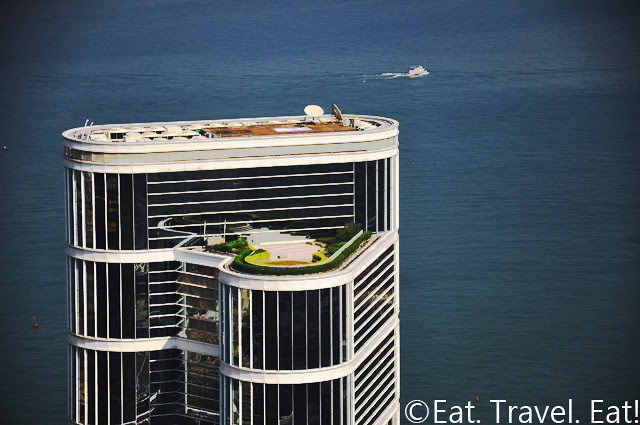 CITIC Tower, being heart shaped, also was quite intriguing. Watching the ships in the background move around the harbor (harbour) was just as interesting as well as relaxing.

(click on the photo to go to Flickr to see a larger view)
In addition to Hong Kong Island, the harbor (harbour) view rooms also had a great view of Kowloon in the distance. 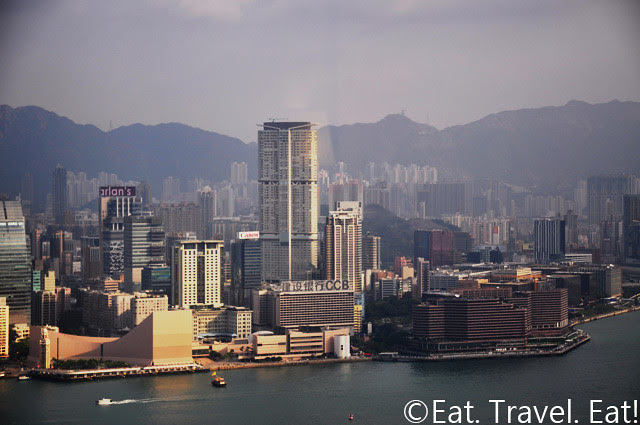 I never realized that a cloudy morning haze could produce such interesting colors (colours). 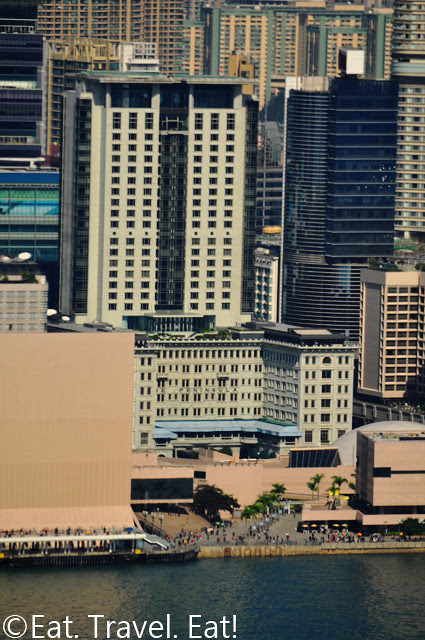 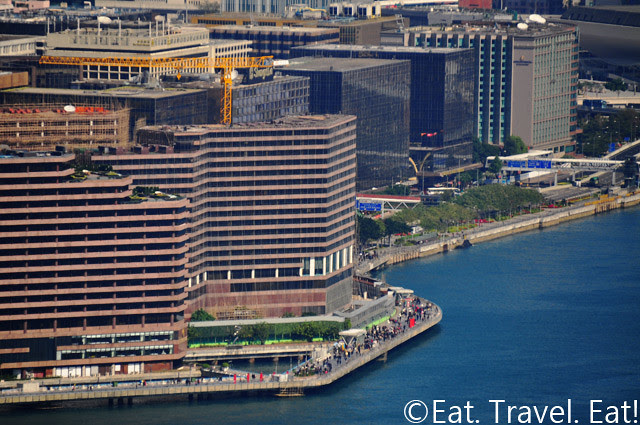 Nor did I realize that there were so many hotels nearby the waterfront- in these photos you see the Peninsula, both of the Intercontinentals (Grand Stanford and Intercontinental Hong Kong in the foreground), as well as the Kowloon Shangri-La and several office buildings. 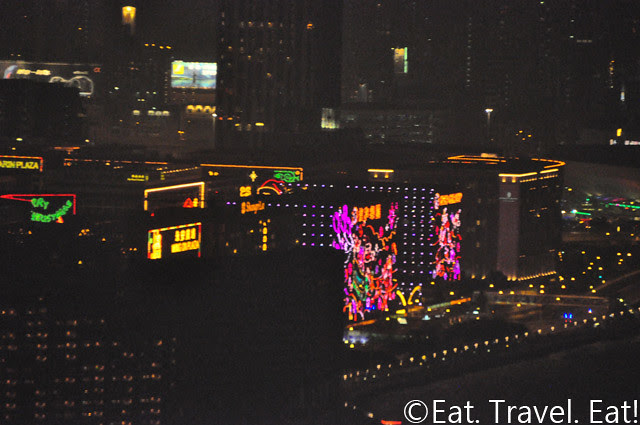 At night a display of "Merrry Christmas" signs appeared, but were only visible with telephoto lenses or telescopes. Still merry nevertheless. And no, your eyes are not tricking you. There are advertisements for the Nikon D7000 and Sony Alpha a33/a55 in the picture....a continuation of the multiple camera ads I saw in Hong Kong in addition to the Canon 60D. 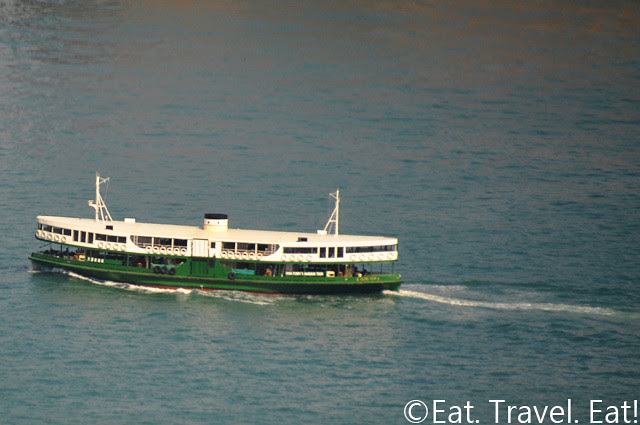 However, what I really enjoyed with all the views was watching the daily action happening right before my eyes. Throughout the day, ships like the Star Ferry would carry passengers or cargo across the harbour. All I really needed to entertain myself was to sit back and enjoy. Sometimes, a vacation is just so much more relaxing when you can calm down watching the view from the silence of your room.