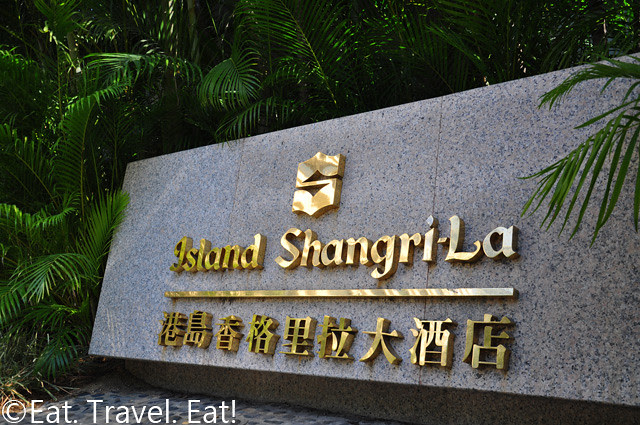 Four months later I am now almost complete with all the background information for Island Shangri-La on this trip! That was long, was it not? This is the last section of interior pictures on Island Shangri-La other than Cafe Too, and after this I'll be rolling in the much more interesting posts on food, attractions and more from the trip up to a certain point. 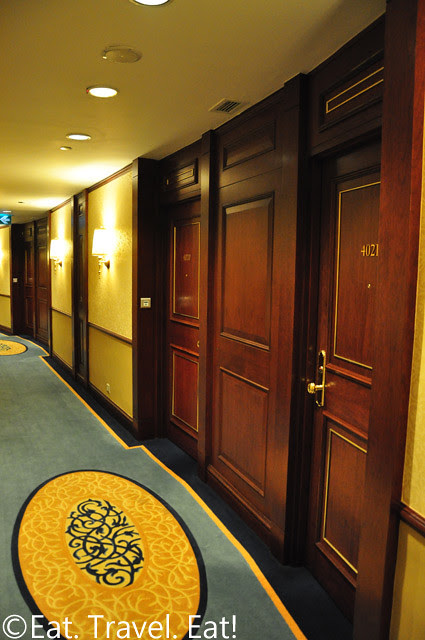 This post is all about the interior sections not included in the earlier public spaces post- pictures on the content that Shangri-La has from the 39th floor and up. I don't have Restaurant Petrus or the Horizon Club lounges included in any of these pictures but other than that you'll have a broad understanding of the actual floors with hotel rooms in them!

The picture above is of the hallway to the rooms. The rooms followed the elliptical shape of the building and for most of the 16 levels were located throughout the entire floor. However, some floors included other rooms in addition to regular guest rooms, like the library. 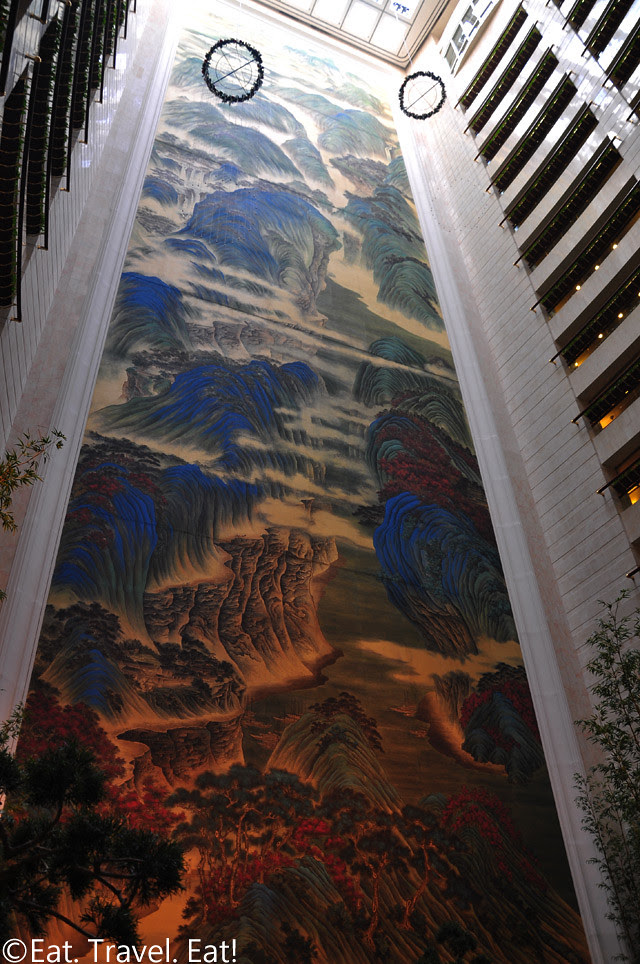 From the 41st floor up a section of the rooms were open next to an atrium with the highlight being "The Great Motherland of China." In my opinion this was the most impressive piece in Island Shangri-La's beautiful art collection; taking 16 stories, it was very detailed and colorful and was an enjoyable sight to watch going out from the guest rooms towards the elevators located near the center of each floor. 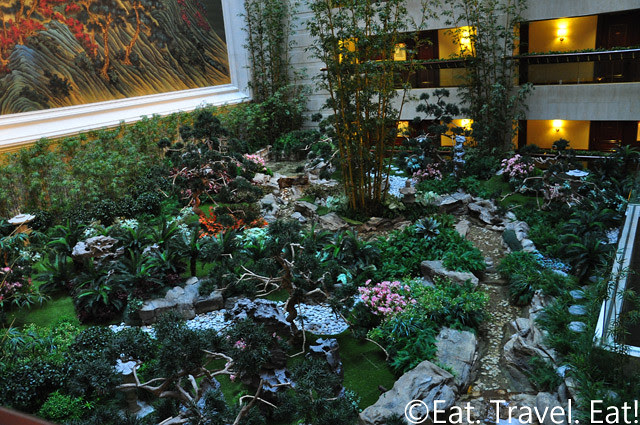 Below the silk painting was a garden section with a variety of plants and a river that crosses part of the garden. 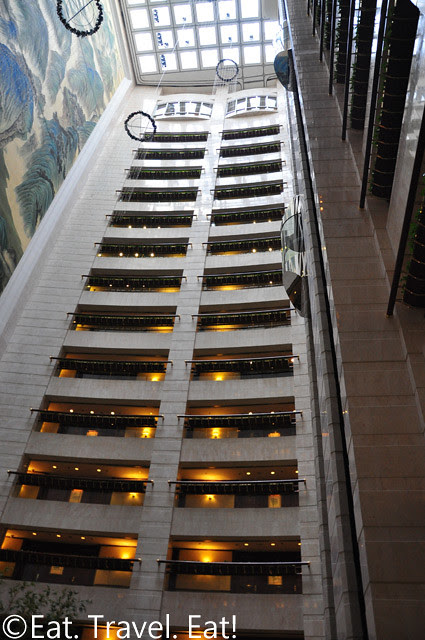 Being on the floors with a view of the silk painting, we also had a view of the other floors. Occasionally we would see housekeepers preparing to clean or prepare rooms with their carts, see bellmans bringing luggage to rooms, or guests walking around. 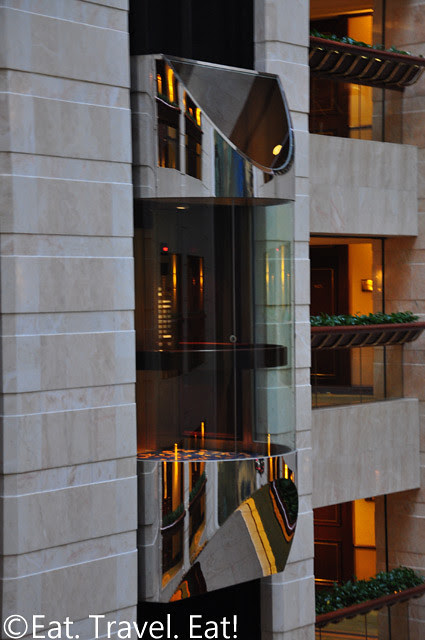 Looking to the right of the previous image you would see two sets of glass bubble elevators; these are special in the fact that not only do they offer a view of the silk painting, they only work on the guest levels. They do not go down towards the rest of the building like the lobby or the fitness center. 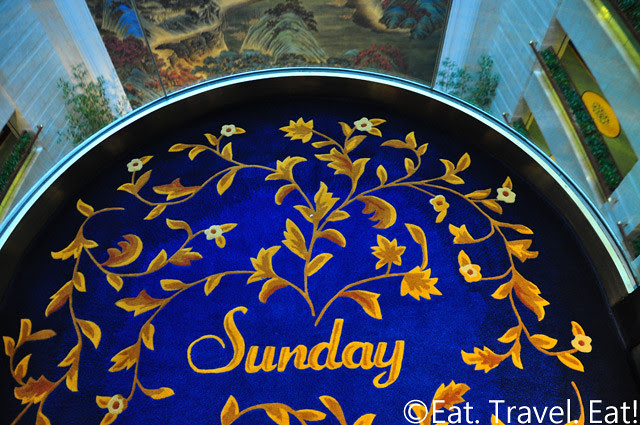 A fun feature that all the elevators shared were carpets that were changed daily to match the days of the week on each day. Kowloon Shangri-La also had these special carpets in a different style in their lifts/elevators during my last visit to their hotel. 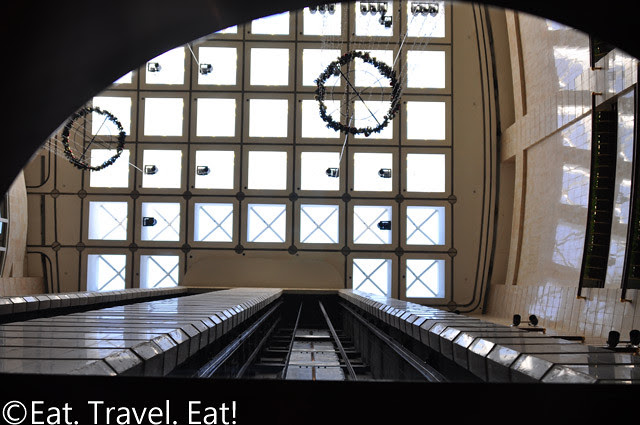 The glass elevators were also interesting in that the top of the lift was made out of glass too, so guests could watch the sky. However, what most people decided to look during these rides when I visited was the "Great Motherland of China."


After all, the lift ride allowed one to view the entire drawing at once with a closer view. I did so several times to make the video above, but the focusing seems slightly off. I need more experience with video! 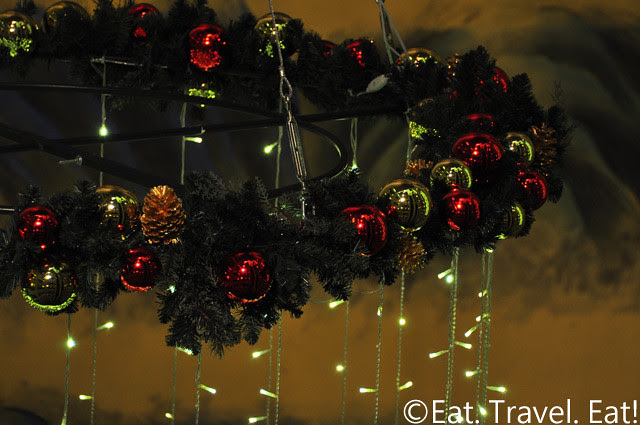 For decoration, Island Shangri-La also hung up some ornaments with lights- that's what looks like a distraction in the foreground in the video. 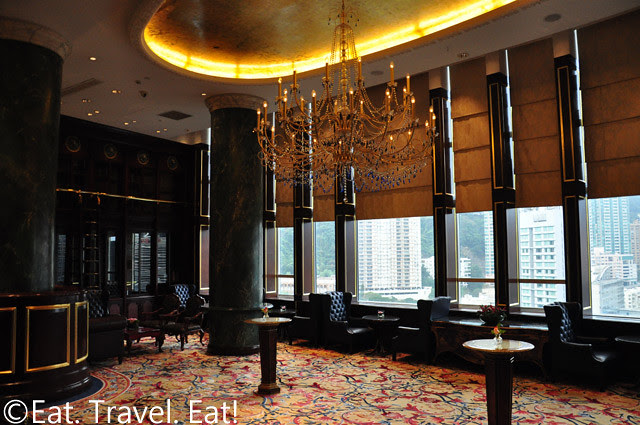 The atrium/conference rooms and the library were the other key features in the guest floors, again other than the Horizon Club lounge/Restaurant Petrus. They call this section the library/atrium- for the most part this was the library, but it also functioned as an greeting area for the conference rooms/atrium. Being late December, the library was altered slightly for functions- in this image the two tables were used for eating areas when the library became a meet and greet area. During our stay, there were also some weddings, a Gucci Christmas Lunch, and some evening functions- plenty of events! 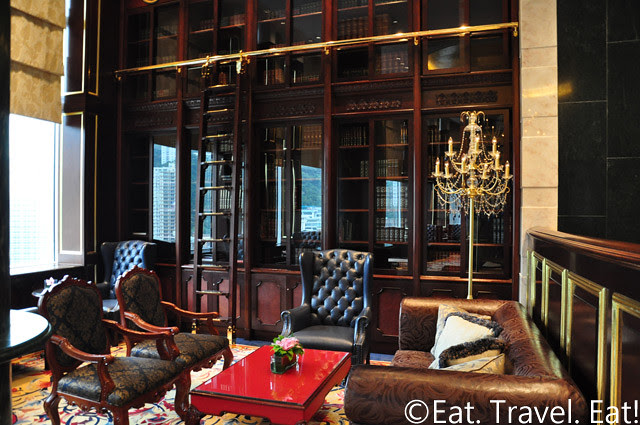 Although there were plenty of events, most of the time the library remain silent even during preparation for events. Being majestic with great views, plenty of guests used the library to study, read books, or to enjoy the view. 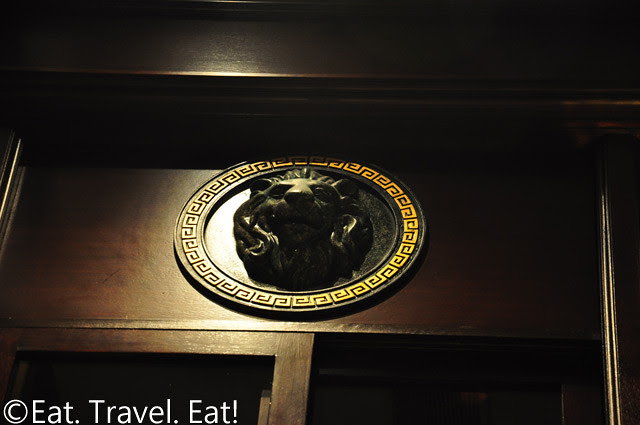 Reading the Shangri-La bookmarks, it really did sound like the library described in Lost Horizon was this exact library in Island Shangri-La. The description matched so well with the library's environment, being "lofty and spacious, and containing a multitude of books so retiringly housed in bays and alcoves that the whole atmosphere was more of wisdom than of learning, of good manners rather than seriousness." 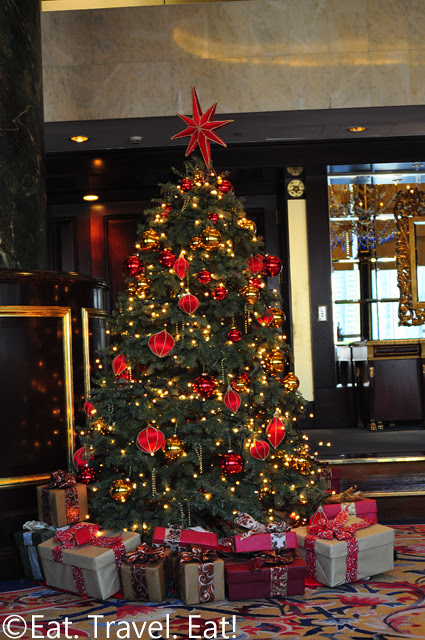 Like the rest of the hotel, Shangri-La put a Christmas tree here as it was a public space that could be spruced up for the holiday mood. Several guests took pictures with the Christmas tree throughout my visit- with such beautiful backdrop, I can definitely see why! 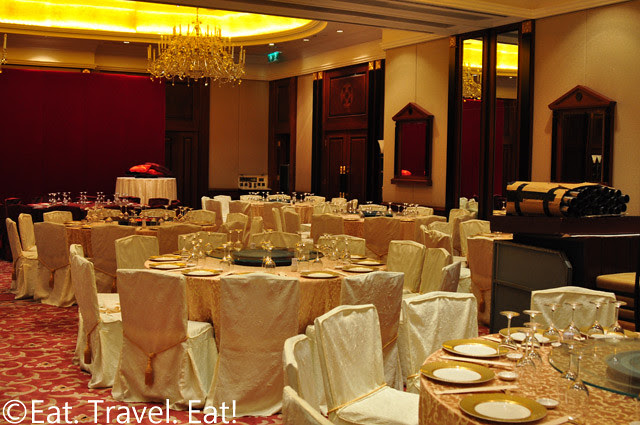 As I wrote earlier, the hotel did have multiple events, and one day they happened to leave one of the doors open which inside had a very elegant table set-up for an event. 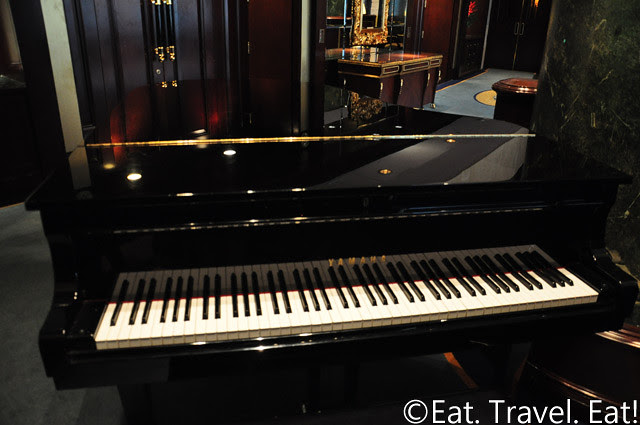 And last but not least, the hotel also had another piano out in the open in the library- this piano being a Yamaha G3. 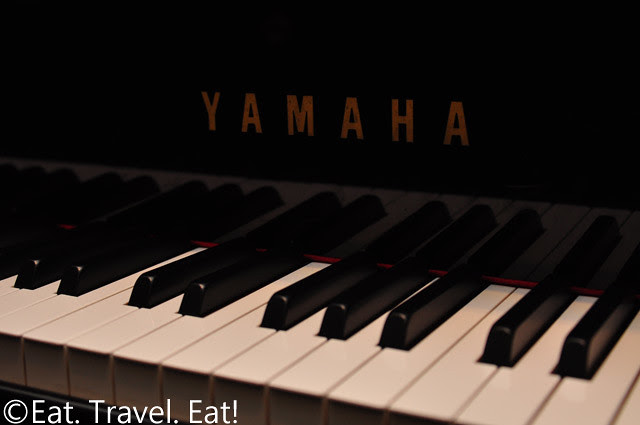 Similar to the other pianos in the hotel, guests could not play on them, but unlike the piano nearby Cafe Too, this piano was actually used during our stay for wedding music and more. However, I only heard this piano once, and other pianos in the hotel only for short periods of time. Would it not be a great feature if Island Shangri-La could record and bring the live music from the action in the lobby downstairs and bring it up to the rooms or the TV? I think so!

Next up: Cafe Too introduction!