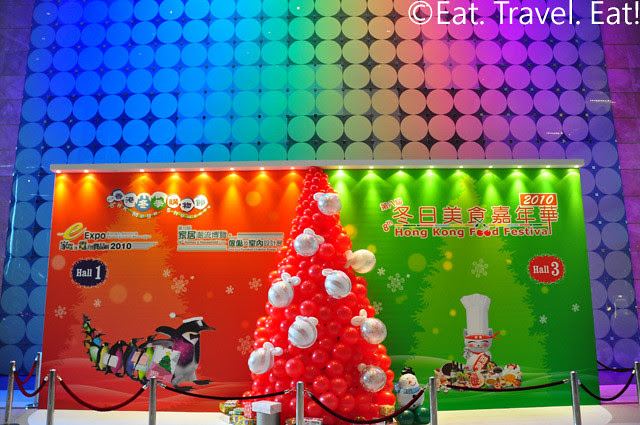 With the holidays comes a plethora of various expos in Hong Kong, and so after breakfast we decided to head towards the Hong Kong Convention and Exhibition Centre (HKCEC) to visit the game expo. There, we found out there was not only just the game expo, but also lots of other festivals/expos like the Hong Kong Food Festvial. 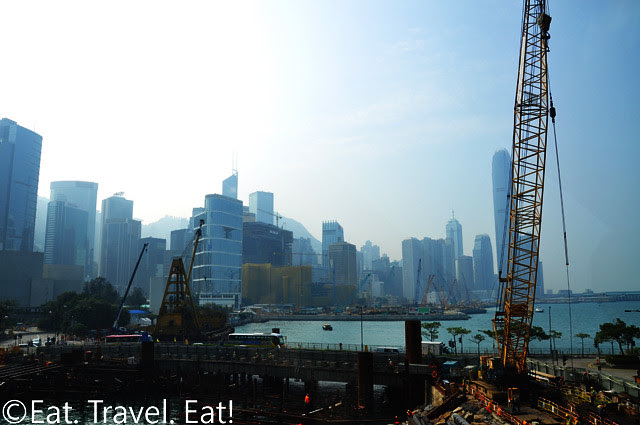 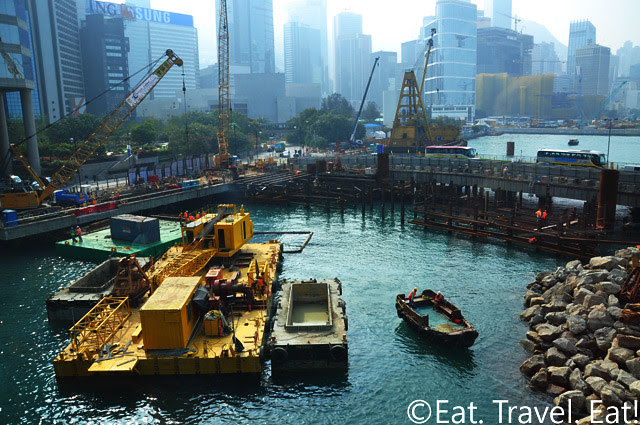 The expos however were already quite full; there were plenty of attendees-- a wide variety of cosplay donned on some people, and cameras on other people like yours truly. Instead of attending an expo like we had planned, we instead decided to walk around and explore the area. 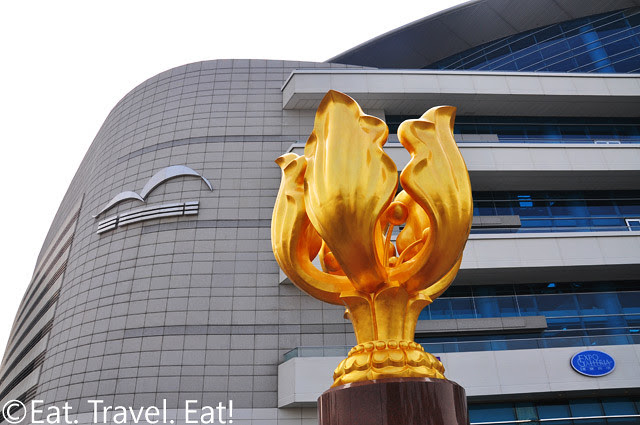 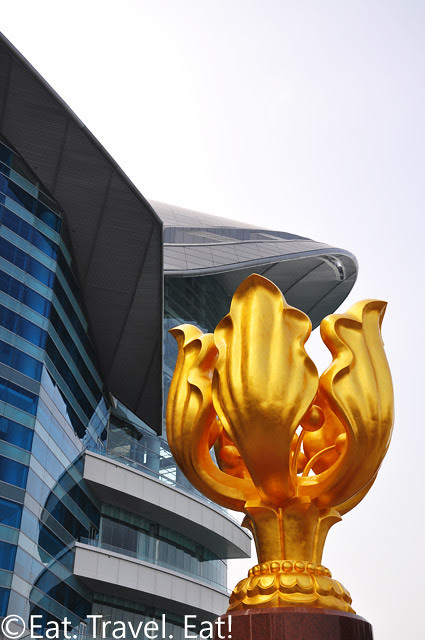 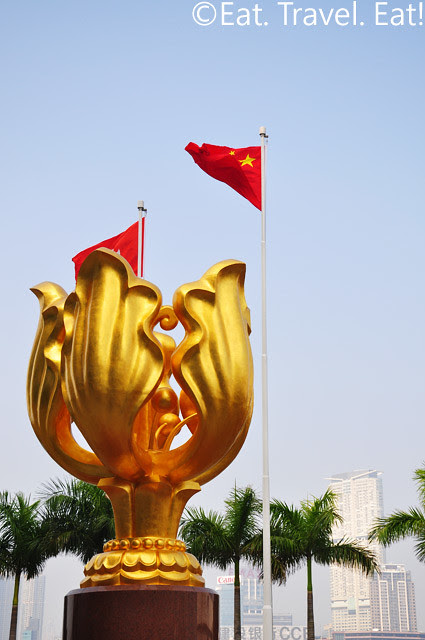 Right outside HKCEC is Golden Bahunia Square/Expo Promenade, where the Golden Bahunia is located. This sculpture commemorates the return of Hong Kong to the People's Republic of China and the formation of the Hong Kong Special Administrative Region; but other than that, it's a beautiful piece of architecture to look at and to take pictures of! Seemingly popular these days, there are now photographers in Hong Kong waiting at the Golden Bahunia who are trying to earn their living by asking people to pay for pictures that they take of them on the spot.

I highly suggest that you be careful when visiting of your belongings as there are plenty of people there; I could hardly get a picture of the entire Golden Bahunia without anyone in the background! There were also at least three people with the same camera and lens that I had while visiting; don't accidentally get your camera switched!

The location of the Golden Bahunia is also perfect for a view of Kowloon and the ships in Victoria Harbour. For a better view of the Hong Kong Island however, you should go across the harbour to the Avenue of Stars; the large walkway allows for ample space for taking pictures! 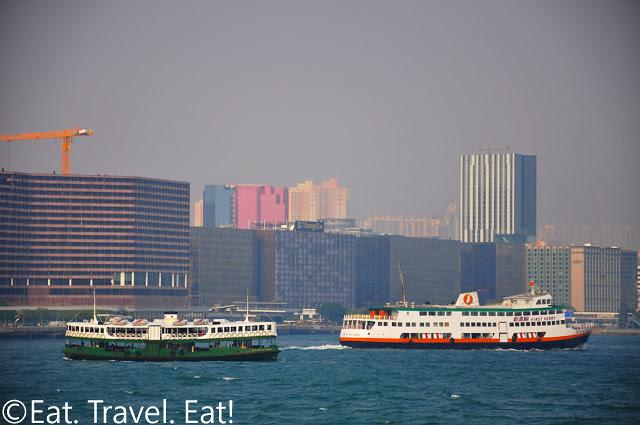 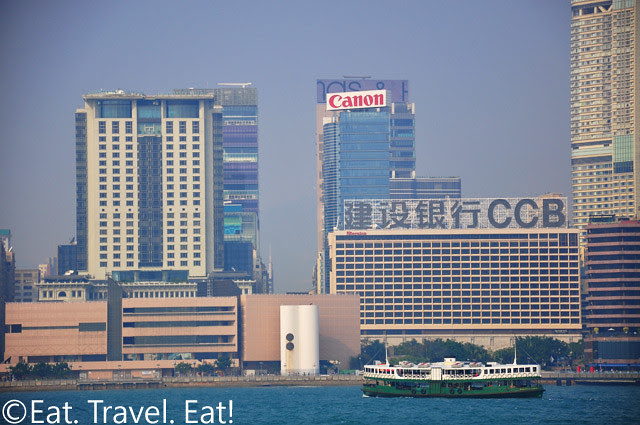 (Star Ferry/ Peninsula/ Sheraton/ The One/ part of the Hyatt Regency Tsim Sha Tsui)
There is also plenty of activity in terms of passenger ships; the Star Ferry (in green) and ships to Macau and China are numerous! 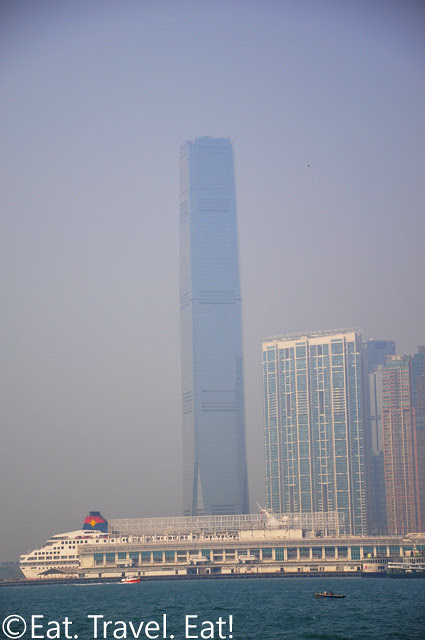 Here is the International Commerce Centre, which houses the Ritz Carlton as well as plenty of office space; it additionally is the tallest building in Hong Kong. Last time I visited Hong Kong, this building was not complete, but now it is and is ready for business! 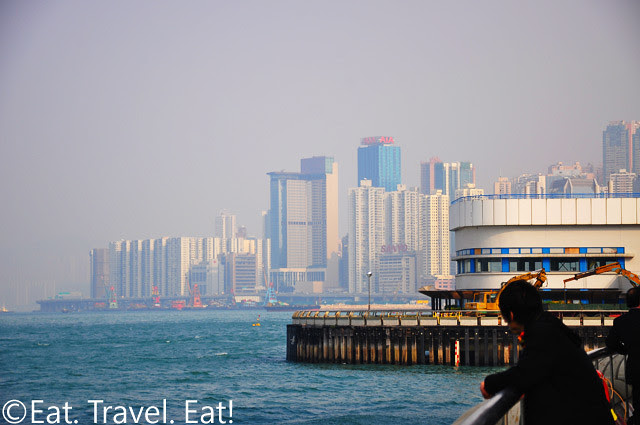 (Fortress Hill/North Point in the background)


I certainly enjoyed the fact that winter in Hong Kong can be quite enjoyable; feeling the breeze while watching the view was very relaxing! 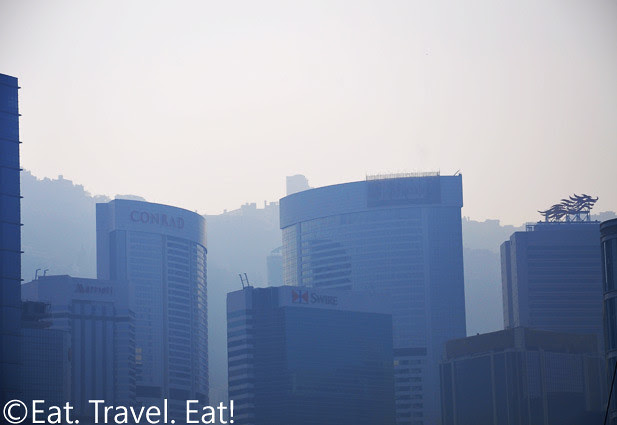 One can also watch most of Hong Kong Island's skyscrapers from the HKCEC area; with this picture, you can see Central/Admiralty with Pacific Place. 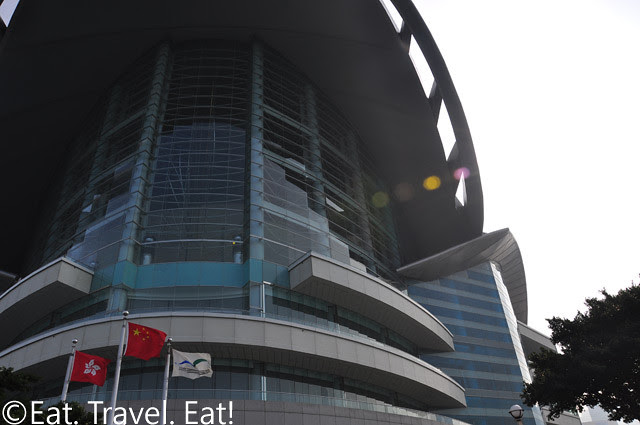 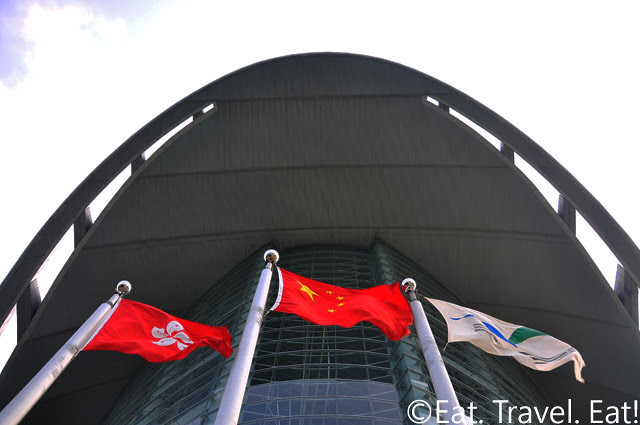 Facing the ocean are three sets of flags- one for Hong Kong, China, and the Hong Kong Convention and Exhibition Centre respectively. Near the flags, one can really get an amazing angle of the HKCEC; it is as if the HKCEC is a ship heading out to the ocean with the flags in front. 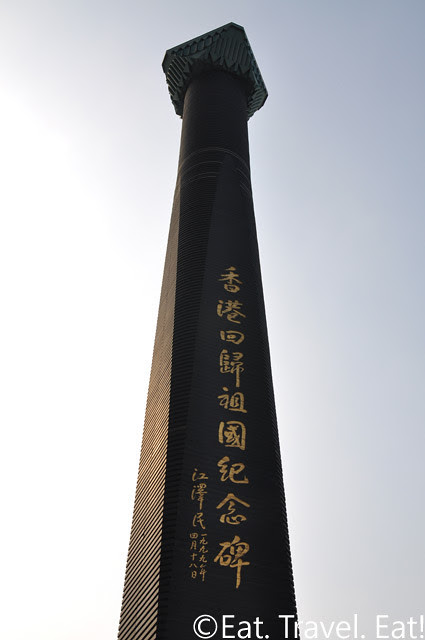 On the other side of the Golden Bahunia is the Reunification Monument; getting closer to the monument reveals many intricate details that make it quite interesting. 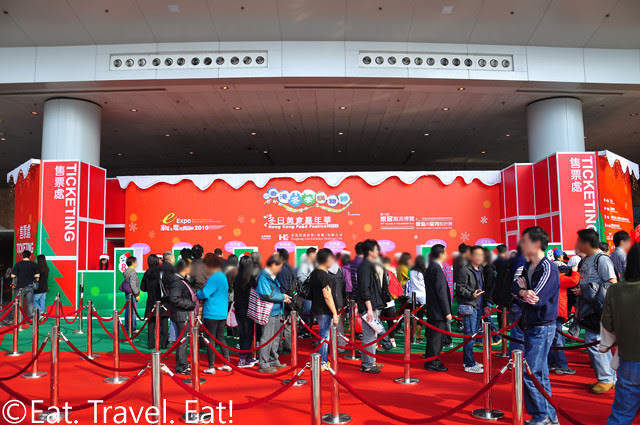 Back inside, we met another long queue for the Hong Kong Food Festival; be prepared to wait in such lines to get tickets to various expos if you don't head out early in the morning! 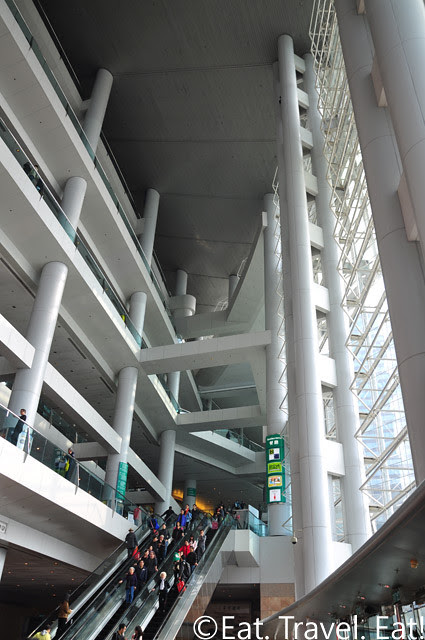 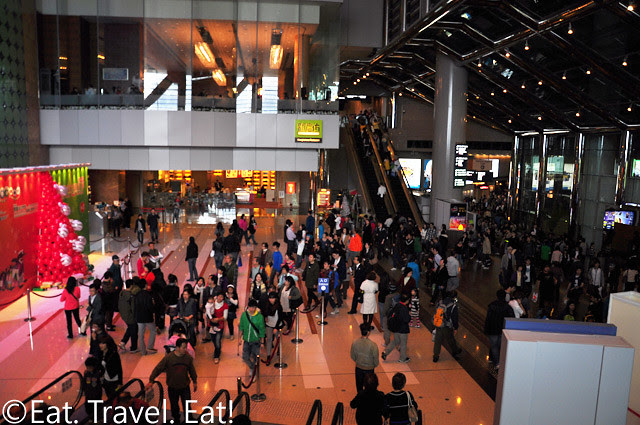 We eventually left the HKCEC, of which we only met more people coming in than we did earlier. Afternoons are busy hours for festivals and expos, so take notice when planning your day for such activities! 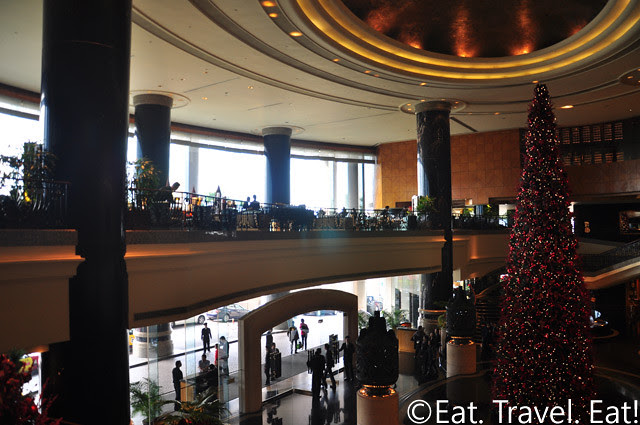 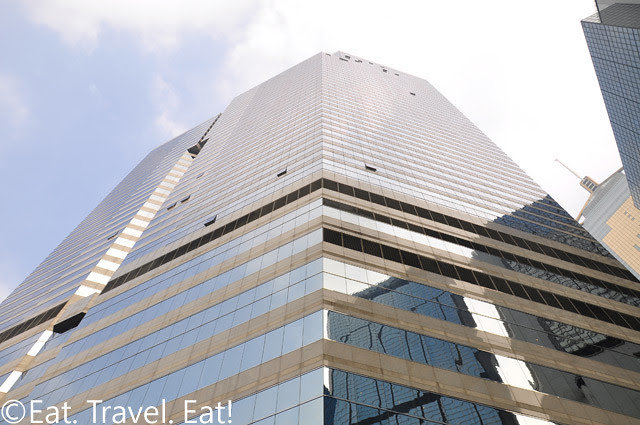 Adjacent to the HKCEC is the Grand Hyatt Hong Kong, so we decided to visit it as well. Actually viewing the hotel in real life is quite different from the stock photos provided by the hotel; the lobby was extremely dark with sunlight providing most of the light, and other portions of the hotel seemed quite dated. 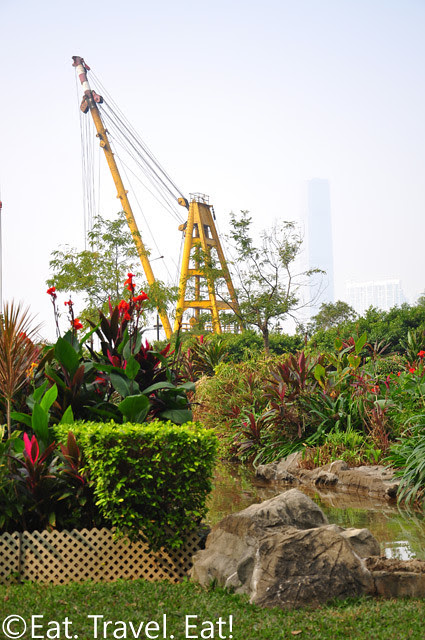 In an effort to find lunch, we decided to walk in the direction towards the hotel, of which we went through quite a lot of buildings and streets. Right next to the Grand Hyatt was a landscaped area; it was quiet and pleasant, yet the crane in the back was a stark contradiction. 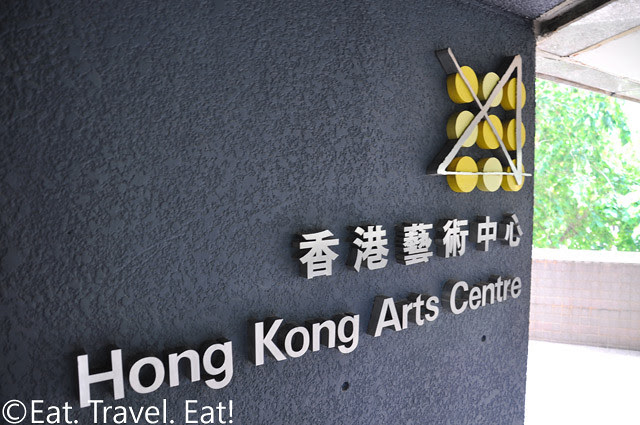 We also passed through the Hong Kong Arts Centre; it housed plenty of photographs and paintings by various artists-- check it out if you like art galleries and happen to be in Wan Chai! 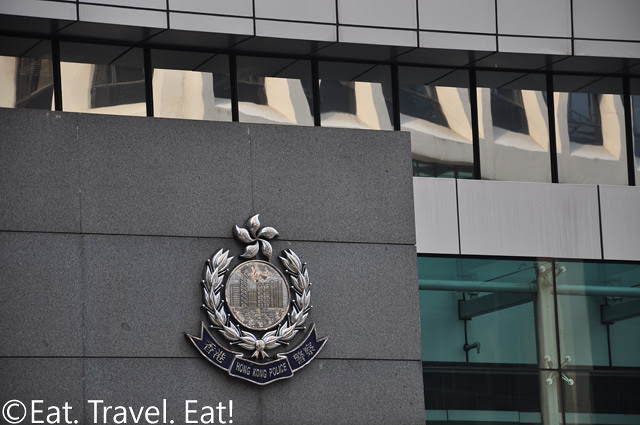 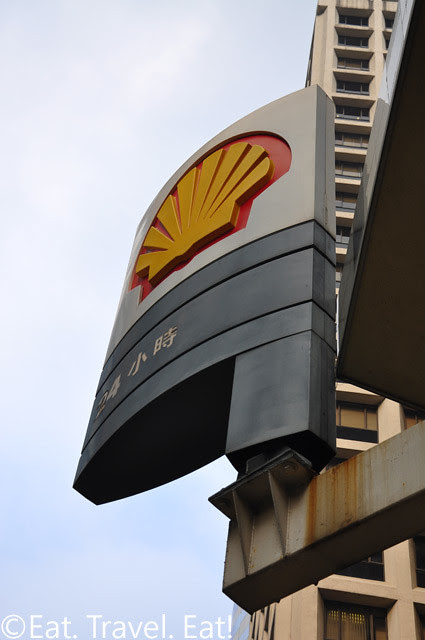 Surprisingly enough, our walk led us back to Pacific Place! The Wan Chai Police Station and this Shell Gas sign are ones typically seen when taxis head out from Pacific Place. Walking is a great option in Hong Kong if you are not in a hurry; instead of paying for transportation, you can get some exercise if you walk and see the streets of Hong Kong. 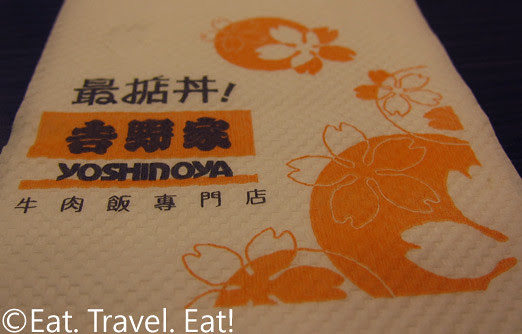 Since there happens to be a Yoshinoya nearby Pacific Place, we decided to eat there. In Hong Kong, there's more variety in terms of the options offered; not only are there rice bowls, but there are noodle bowls as well and special offers! 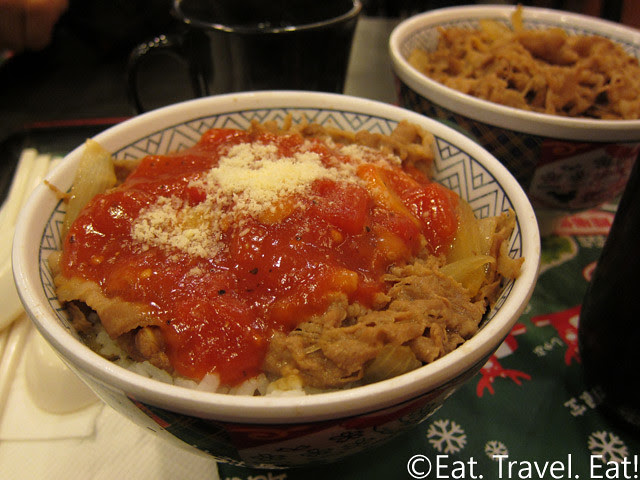 One of my companions ordered one of these specials- a beef bowl but with a tomato sauce on top. The tomato sauce was nothing special- it seemed as if it was canned- but was an interesting addition to the usual beef bowl.

As you may have noticed already, these bowls are disposable styrofoam bowls but instead are reusable bowls with plenty of heft and designs. I wonder why Yoshinoya does not use these types of bowls in the United States. 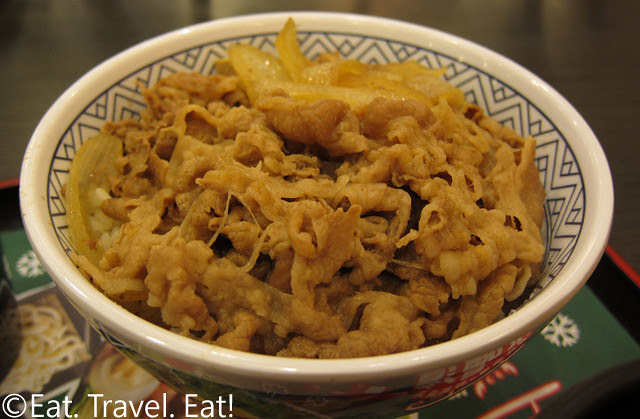 I ordered the regular beef bowl, of which tasted like typical Yoshinoya-- thin fatty beef slices with hints of wine, soy sauce, and onion over a bed of short grain white rice. The rice seemed to be more chewy in Hong Kong though, and the beef was fresh-- no awkward shimmering bluish colors that can be seen when beef slices are left out too long. 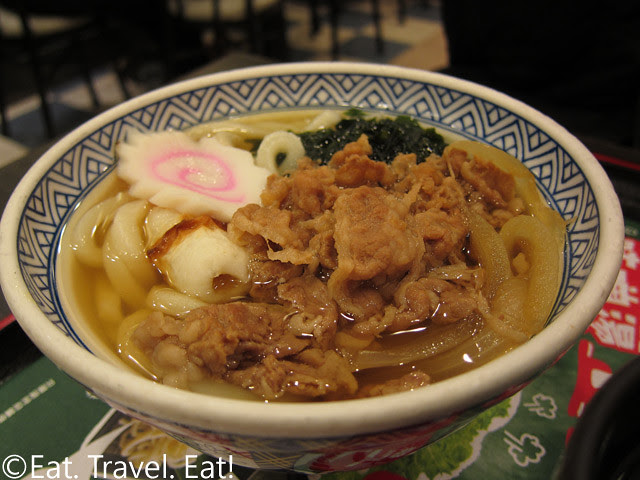 We also tried out Yoshinoya's Beef udon, which was a very decent bowl of udon. There were fishcake slices and seaweed in addition to the beef, and the udon noodles were chewy and slippery. The broth was special as well; it was not just flavored by a soy sauce base but also stock.

Overall we enjoyed our visit at a Hong Kong Yoshinoya; the slightly lower prices for the items compared to the United States also makes it a good option for a quick lunch. All the items were around 20 HKD. 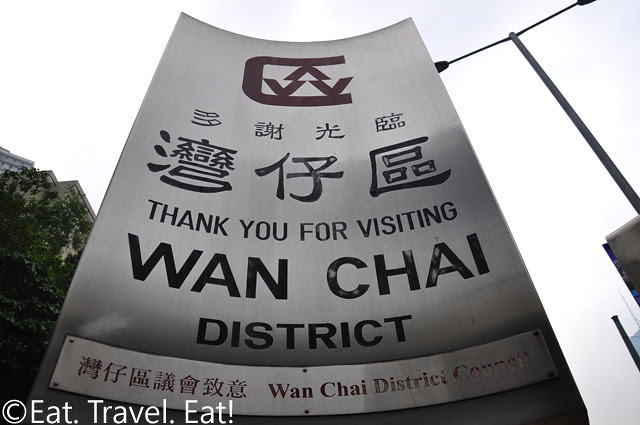 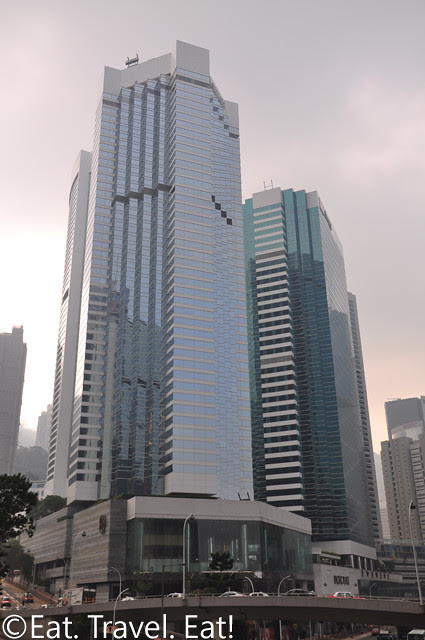 And back to Pacific Place we went for a quick rest.