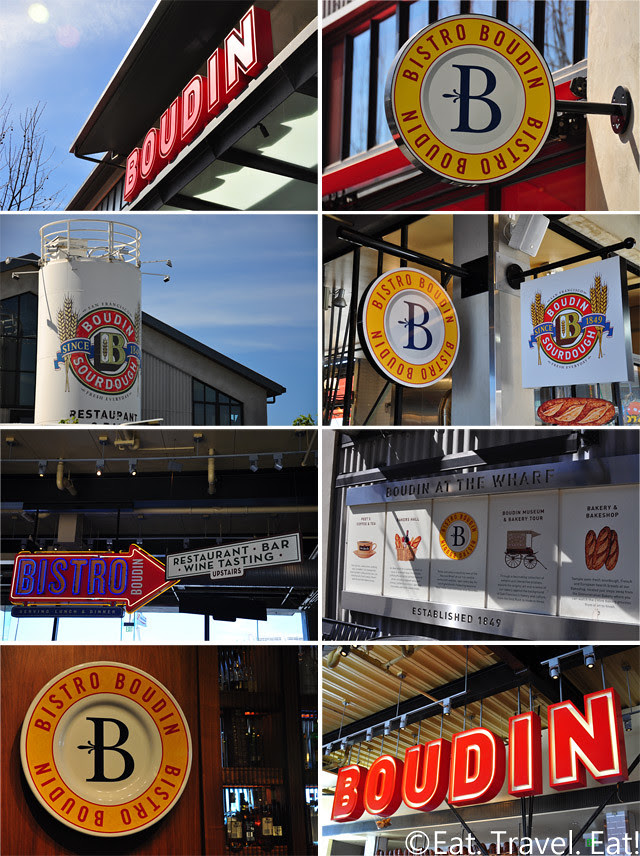 After reading David Ng's article on Boudin, I reminded myself to visit the Fisherman's Wharf location on a future trip to San Francisco. So, after visiting UC Berkeley, we promptly went back to San Francisco for a late lunch at Boudin. 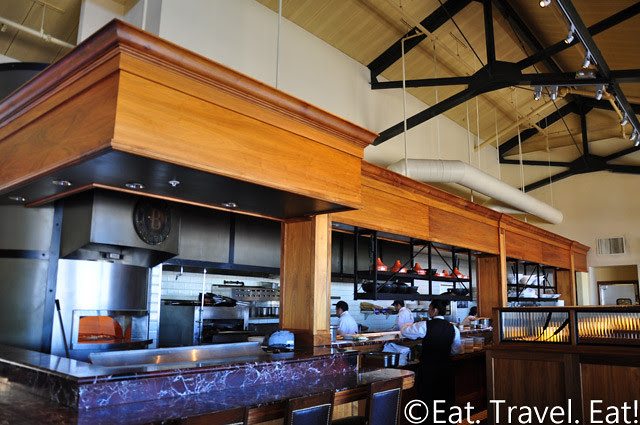 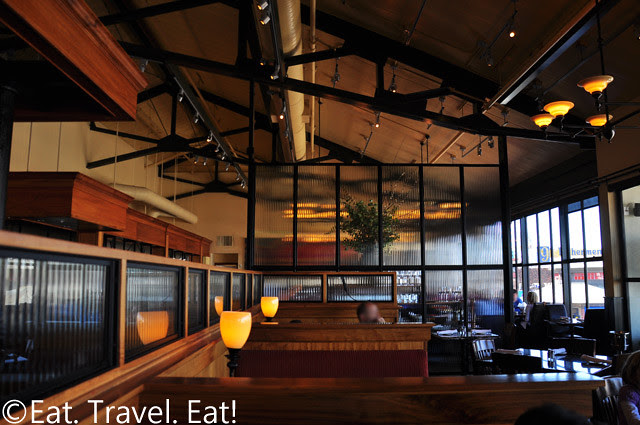 The Fisherman Wharf's location is a prime tourist spot; its glass windows and prominent logos make it distinctive among the other buildings in the area, and it houses five different sections: Peet's Coffee and tea, Baker's Hall, Bistro Boudin, Boudin Museum & Bakery Tour, and Bakery & Bakeshop. There is plenty to see and do in just this confined area! We skipped viewing most of the building and went upstairs to Bistro Boudin, a full-service restaurant. 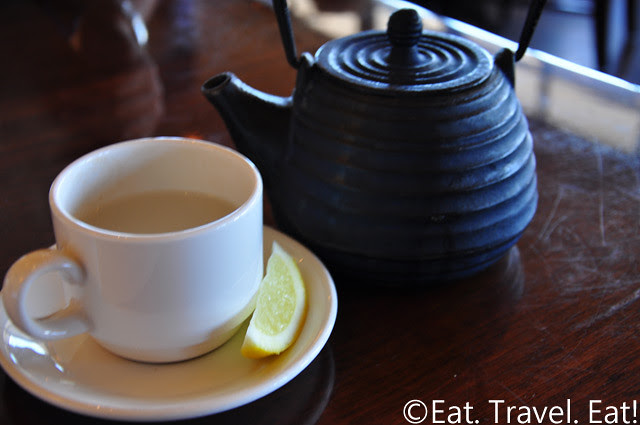 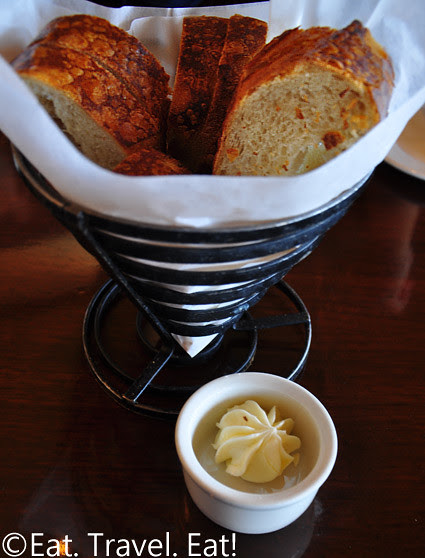 One will pay a premium at Bistro Boudin for its full-service capabilities, dining environment, cutlery, and additional items on the menu. Several selections, however, are the same as those of Bistro Boudin, but  presented in a more casual manner. Paper or plastic serving ware replaces the heavy porcelain serving ware for diners ordering downstairs. As we were to realize later, eating downstairs would be a much quicker and cheaper option compared to Bistro Boudin; unless a slow, lengthy meal is what you prefer, eating downstairs is a wiser choice.

The complimentary fresh sourdough bread was nicely tangy; tender on the outside and crisp and crackly on the outside, it was scrumptious, especially after walking on the Berkeley campus during the morning. The crust had a rustic pattern to it that I did not see at another Boudin location; the pattern of this bread had more variation in color, while in the other location, the appearance of the crust was almost uniform. The butter, on the other hand, was typical, although it was nicely piped. 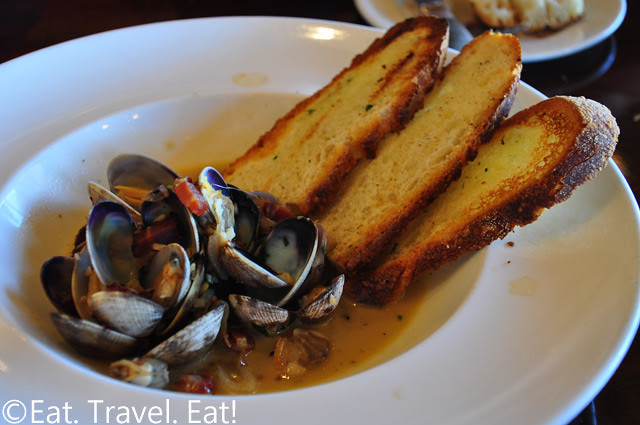 Our first appetizer, the Manila Clams (13.95 USD), arrived when we had almost finished the entire bread basket! The clams were cooked with pancetta, onions, parsley, white wine, and garlic butter; these ingredients provided a rich, smoky broth to the fresh clams. We finished this appetizer quickly; it didn't take much to empty the entire dish, especially since the portion size was so small. 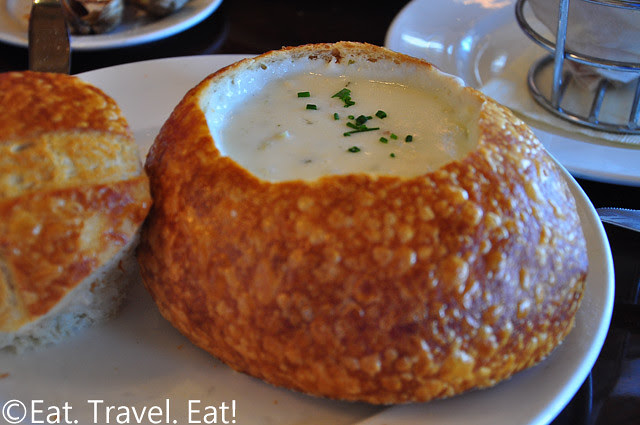 Our second appetizer was the Boudin Sourdough Bread Bowl (12.95 USD), which was filled with clam chowder (crab and corn bisque is the other option). This bread bowl is larger than that of the "petite" bread bowl on the Bistro Boudin menu; the "petite" portion is actually the same portion size as the downstair's offering, but with an added markup of about 70 cents. We really liked clam chowder here; it was not too salty and was lightly creamy, with plenty of clam flavor and clams in the breadbowl. I liked how the vegetables still held their texture, especially the potato chunks. Waiting for the first appetizer to arrive and the lapses in service though, we had barely enough stomach space to eat the bread bowl's crust, but did enjoy the interior of the bowl, which retained some sourness while gaining the seafood flavors from the chowder. 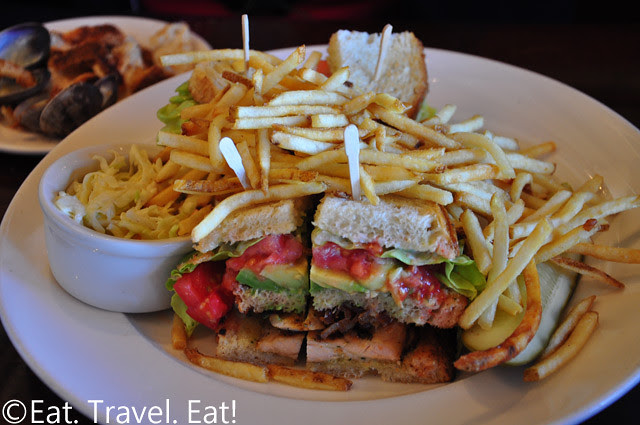 The Classic Chicken Club (13.95 USD) was decent for most of the dish; what made it not enjoyable was the extremely dry chicken. Another service problem was found here; my companion requested that the bacon be omitted, but instead plenty of thick-cut bacon pieces greeted us when it was served. The rest of the dish was tasty; the same quality sourdough made a presence here, and the vegetables in the sandwich were fresh. The thin-cut, fragrant french fries, pickle, and coleslaw were likewise tasty and liked by everyone at the table. In particular, the coleslaw was refreshing since it had some horseradish, and was something cool and refreshing in comparison to the crisp, savory fries. 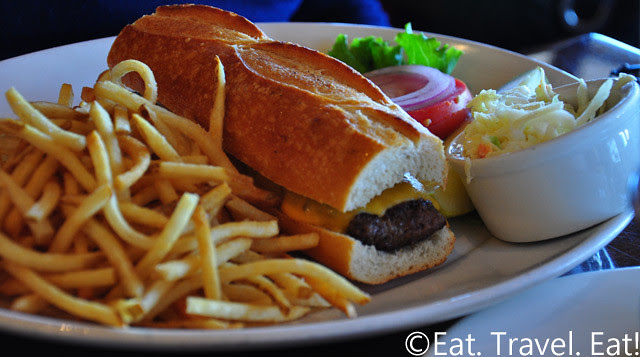 My other companion ordered the Sourdough Baguette Burger (13.95 USD), which had Creekstone Farms beef, toasted baguette, lettuce, tomato, red onion, and cheddar cheese (as requested by my companion). I did not get to try this, and nor did my companion make much comment on it. The same sides of coleslaw, pickle, and french fries also appeared here. 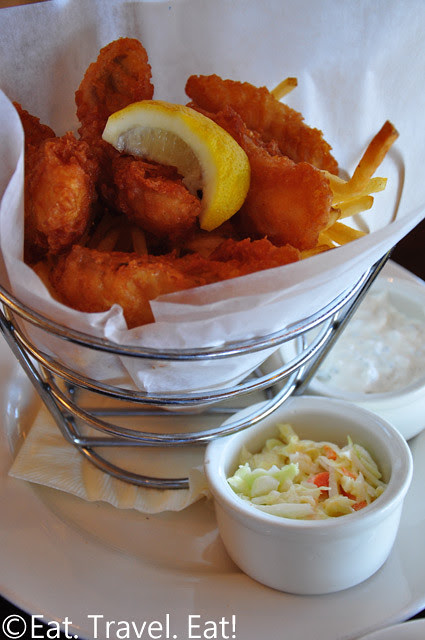 My Fish and Chips (19.95 USD) was better. This had several large pieces of tender fish that was dipped in an Anchor Steam beer batter and fried to golden brown; the fish was tender, flaky, and moist, while the crust was very thin and fragrant. 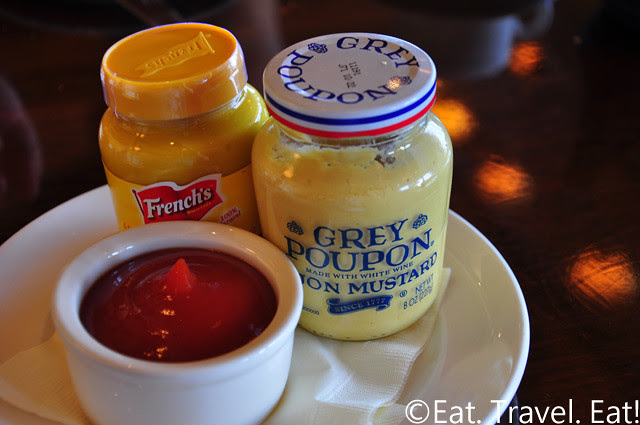 Ketchup, yellow mustard, dijon mustard were some additional condiments provided. I made most use of the ketchup and the tartar sauce for my meal; some malt vinegar would have made the dish even better!

It would have been a pretty enjoyable meal, but the exceedingly slow and unfriendly service was detrimental to the dining experience. That and the exorbitant pricing (although yes, the rent at Fisherman's Wharf is probably extremely expensive), while offering decent food is a combination that does not work. 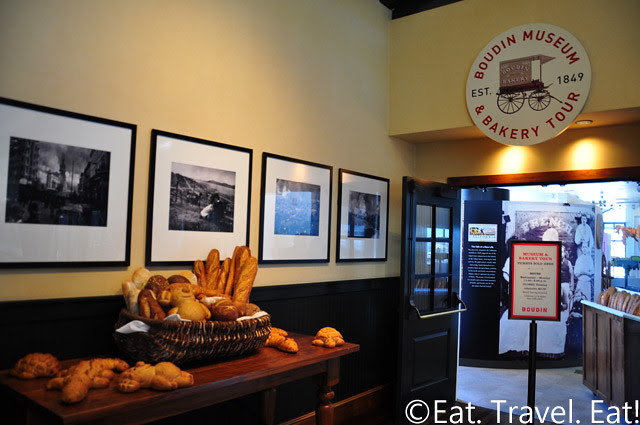 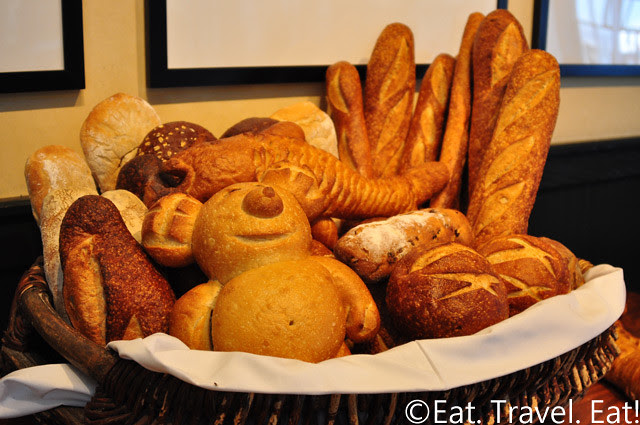 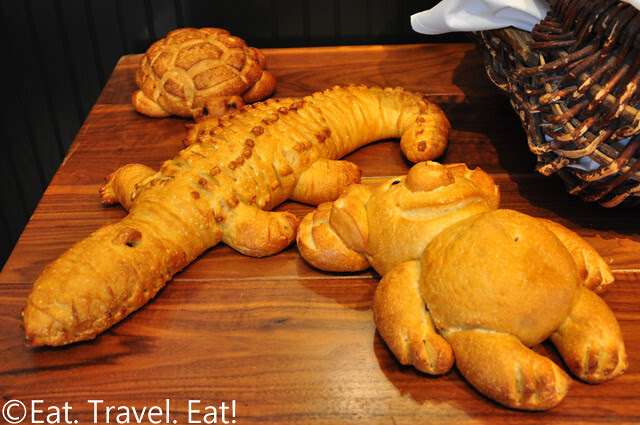 After the meal, it was time to look around Boudin. The upstairs section also houses the Boudin Museum and Factory Tour, which entrance requires a fee. A beautiful display of sourdough welcomes visitors to the upstairs section. 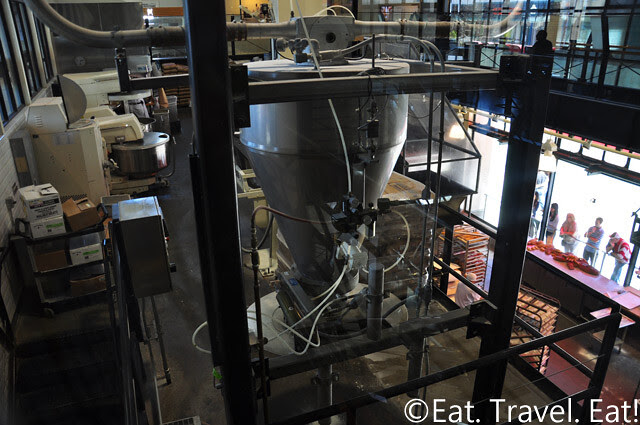 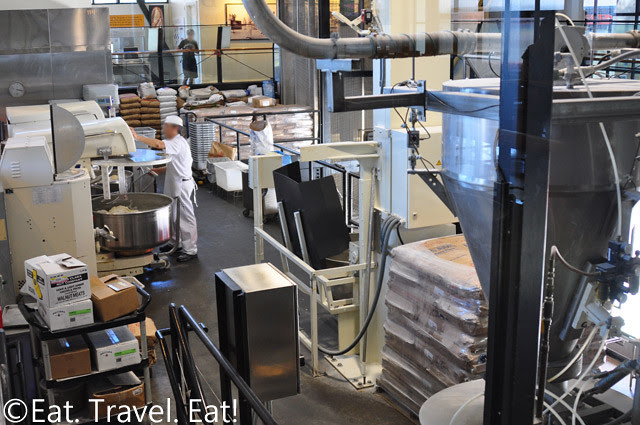 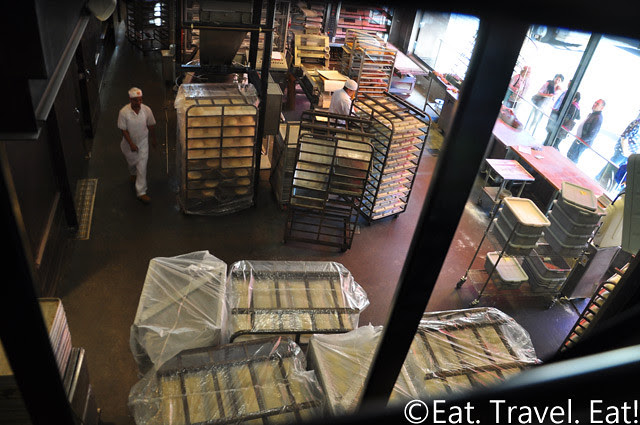 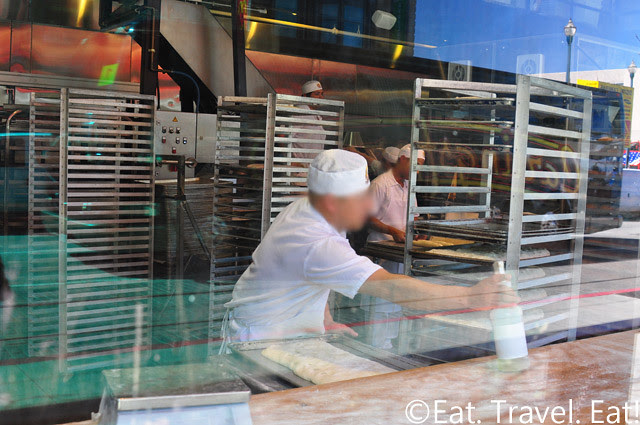 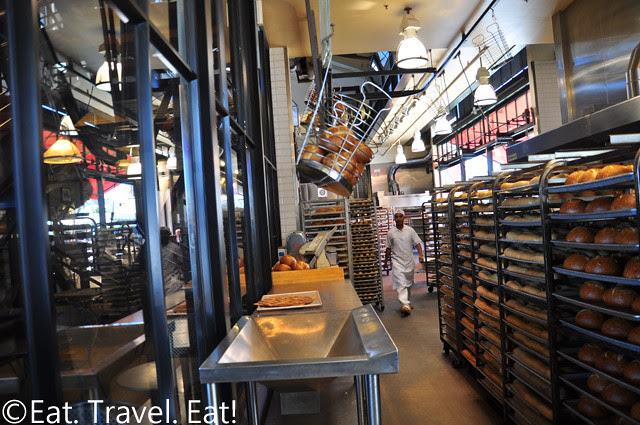 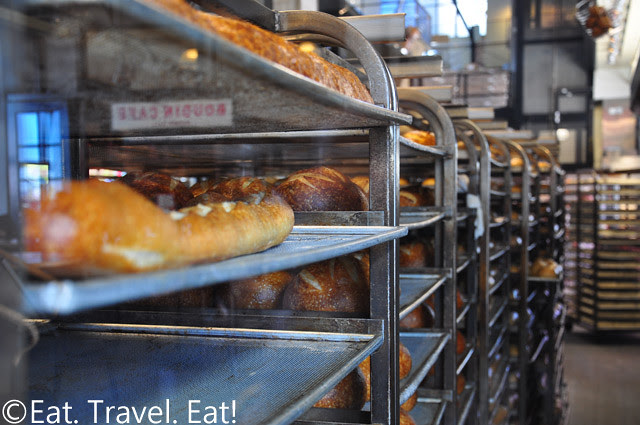 The large windows nevertheless still make for a great viewing of the demonstration factory. All these pictures above were taken through their windows!

Visiting the location that has been featured in so many different pieces of media, whether it be online or on television, was a great experience.For those who do not have the chance to visit the Fisherman's Wharf location, some of the other Boudin branches also do offer large windows to view the bakers at work, as well as the cafe menu. You can see a video that I took of a baker making bread in an Boudin location in Irvine, CA by clicking here.