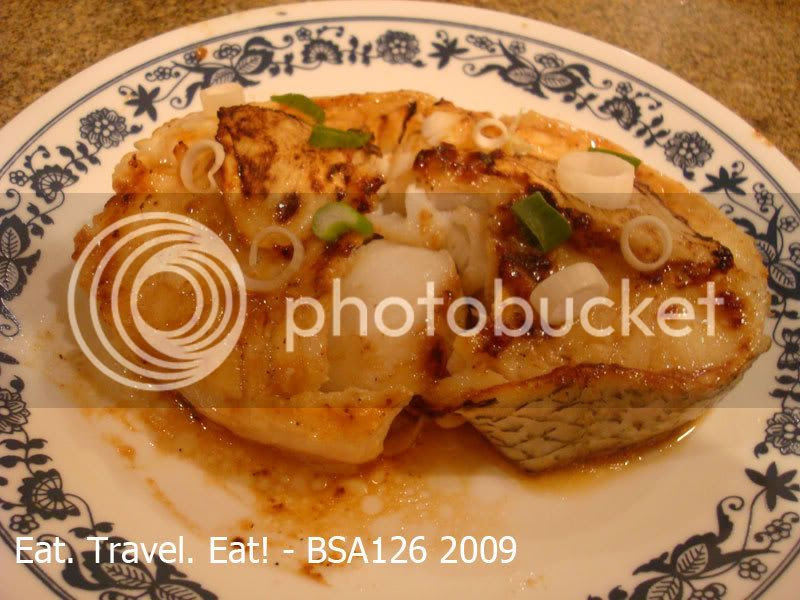 This is my first home cooking post :). Wasn't planning on doing this, but thought, why not? And so here it is.

After eating at Woo during our trip to Las Vegas and trying the "Black Cod Miso", we wanted to try making this at home. Yesterday was the right day to make it.

Going to the local 99 Ranch Supermarket yesterday, we found the seabass to be one dollar less than usual, and so it was a good time to get it. "Cut the steak into 2 pieces please", we said, and we got one that looks like the one above and a bigger one. This one was small, and so it was fit for us to eat.

However, we were slightly hesitant. We looked at some of the other varieties of miso, but they cost much more (4-6 dollars). This miso though, was a good deal (even cheaper than the same brand, but not in a tub but rather plastic bag). And so we bought it.

We did look at some recipes, and analyzed the ingredients. However, we were eating it tonight, and some recipes said to marinate the fish. We didn't want to use a pan to heat up ingredients to make a marinade either. Instead, we rubbed the miso paste on. Mainly we just wanted to see how the miso paste would taste like.

Turnout? Pretty good, but there was not much sauce. The miso paste did penetrate into the seabass, but not too long. After we put the paste on we cooked it! Also, the miso paste got charred, and so we took it off (which was easy to do).

Things learned? Bake the fish, not pan fry it. The seabass today was so tender to the fact when we tried to take it out of the pan it was about to break into pieces. Luckily we pretty much saved it.

You'll need:
A filet of seabass (or steak like the one above. Ours was about an inch thick)
Miso Paste (we used white/red, but you could use others)
Ginger (helps remove some fishiness)
Salt and Pepper
Corn Starch/Potato Starch
Green onions

Directions:
1. If frozen, defrost it, and wash it under some water. Tap it dry with a towel or napkin.
2. Salt and pepper the sebass on both sides. Do not use too much pepper or else the whole dish will be...peppery! You don't want that, especially with such an expensive fish.
3. Take a spoonful of miso paste, and smother it around the fish. There should be a thin layer of miso paste all over.
4. Then, VERY lightly dust the fish with some corn starch (or potato starch). This creates a smooth outside.
5. Cook! Put some oil in the pan, and then put 2 pieces of ginger in. After that, put the fish over the ginger pieces, and cook for about 10 minutes for both sides. Let it sit in the pan after both sides are brown for about 5-10 minutes.
6. Garnish with some green onions and eat!