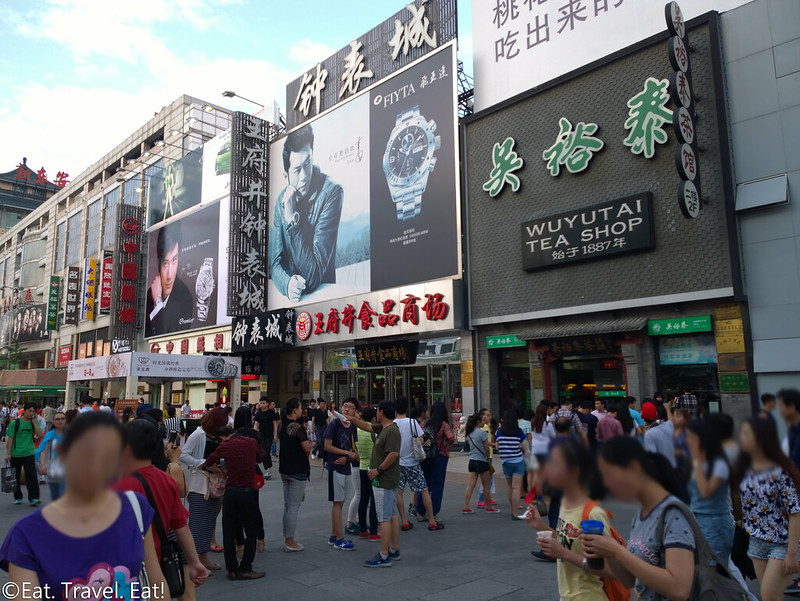 During the summer, in the touristy shopping area of Wangfujing, one will quickly notice two things:

1. Lots of people are enjoying ice cream cones. At least half, or greater, have green tea flavored soft-serve ice cream in them.
2. There is one place that sustains a long line at its storefront throughout the day: Wuyutai Tea.

But what is this line for? And more importantly, why are people waiting for about 5 minutes to reach the storefront for? 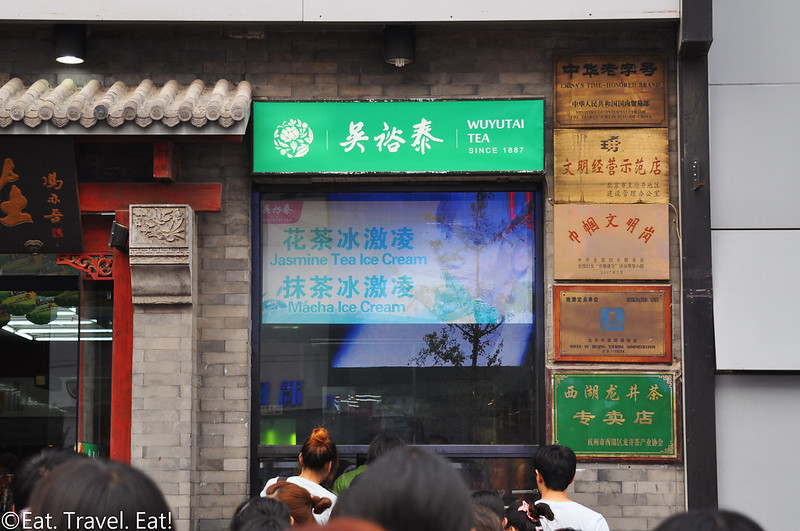 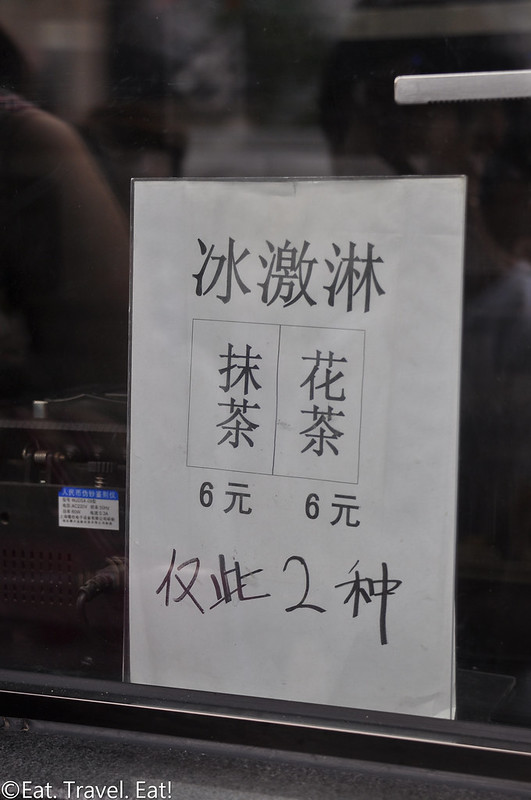 Ice cream! More specifically, soft-serve jasmine tea and matcha ice cream for 6 RMB/CNY/yuan, or approximately 1 USD, with a per person limit of only two cones. That may sound cheap, but you need to compare to its local competitors. McDonald's green tea ice cream (offered as is or with a swirl with vanilla ice cream) cone costs 4 RMB each, and if you get two, the second is currently 50 percent off, making each cone worth only 3 RMB. Or in other words, you could get two McDonald's ice cream cones for the same price as one Wuyutai ice cream cone. KFC's regular vanilla ice cream cone is just 2.5 RMB.

So how does Wuyutai get so many customers when its ice cream cone is double the price?  Wuyutai's ice cream was introduced in 2009 as part of an initiative to reach out to younger clientele. From previous visits to Beijing, I knew that Wuyutai Tea is a time-honored brand in China and that locals highly regard it. However, to answer the question about why the ice cream is so popular, I had to line up myself and try it out.

(Overhearing some people speak also revealed these pointers: the ice cream has a lot of tea flavor, and thus parents were telling their kids they might not like it, even if it is ice cream. The two cone per person limit also becomes valid: some people wanted to order as much as they could, and others went back in line for another round right after they got their ice cream!)

As I began to reach the front of the line, I finally saw the two Taylor ice cream machines churning out the soft serve ice cream. Things of note? An employee poured a fresh, full blender pitcher of matcha ice cream mix into the top of the ice cream machine. Off to the side? Lots of empty plastic containers of Bright Dairy Milk. Aha, so Wuyutai mixes their own ice cream base. (At the end of the day, there were tons of these plastic milk containers being brought out for recycling.) 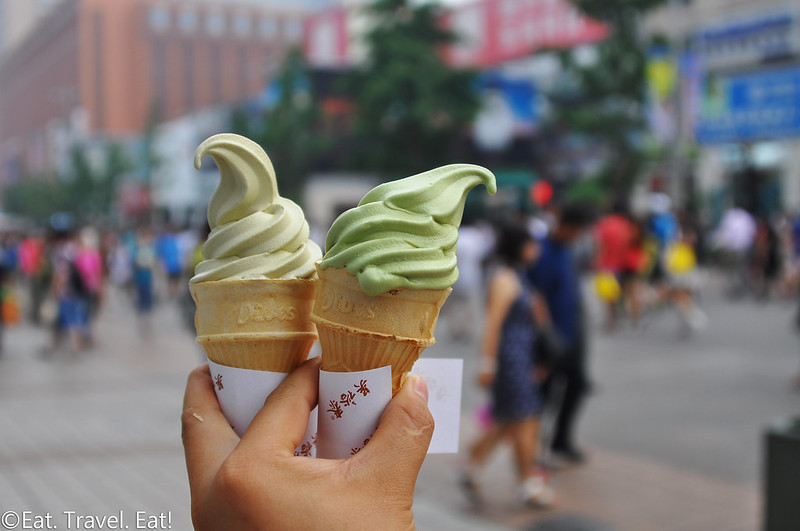 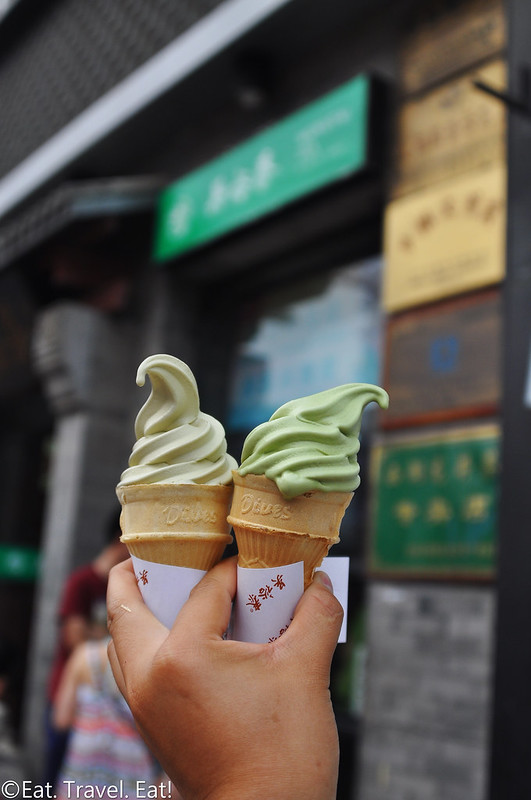 Taste-wise, these ice cream cones were quite scrumptious, and both were true to their respective tea flavors. The matcha ice cream was like an excellent green tea ice cream, with a very bold, verdant, deep matcha flavor. But less common, and for me, more memorable, was the jasmine milk tea ice cream. Here, the jasmine tea was brewed for enough time that the dark, concentrated jasmine tea flavor became the focal point of the ice cream; this was no milky milktea, but instead bold tea flavor with every bite!

Both ice creams were creamy and smooth, but the tea played the dominant role in both flavors-- you could even see specks of tea leaves/powder in each cone! Quite worth the 6 RMB, even if the cones aren't filled from the very bottom of the cone. (McDonald's and KFC do this too--they start piping the soft-serve near the wider end of the cone and go up, leaving the bottom completely hollow) 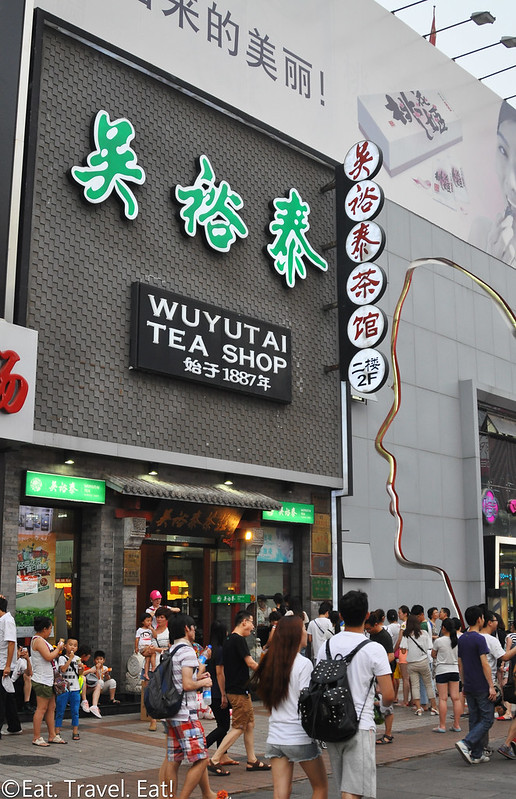 So, if you're into tea and happen to visit Wangfujing while you're in Beijing, Wuyutai Ice Cream is worth a visit! The higher prices and wait time are worth it in the end. 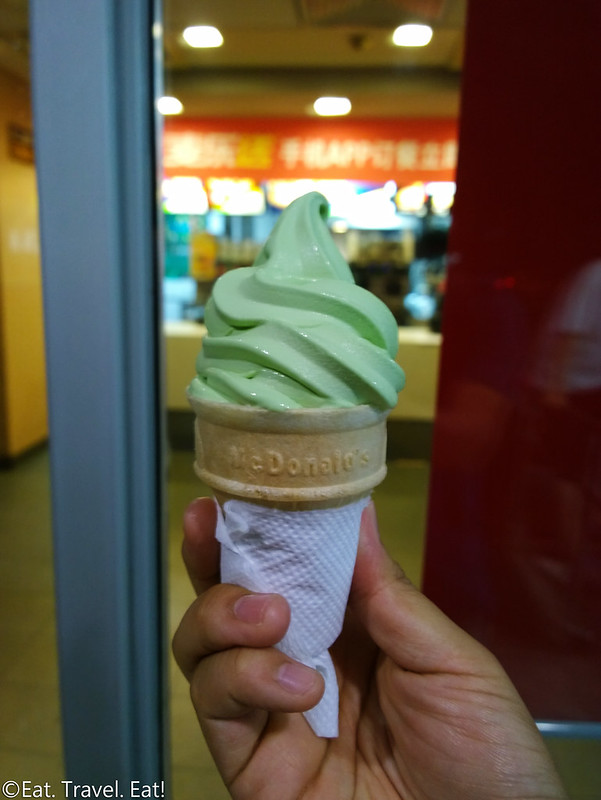 And for a comparison, here's McDonald's green tea ice cream cone (3 RMB average if you get two, 4 RMB otherwise), which I had when I wasn't in Wangfujing. McDonald's tends to only offer the green tea flavor only in its "dessert" outlets, a separate section from its McCafe section and regular menu section. Make sure you line up in the correct spot-- the dessert outlets are usually near the storefront or in standalone structures, while the McCafe and regular menu queues are indoors.

What's most noticeable first is the creamy, pastel green color (most likely due to artificial coloring) instead of the darker green seen in Wuyutai's version. Taste-wise, there is plenty of green tea flavor, but not as deep as Wuyutai's. The creamy dairy base and sweetness stands out much more in McDonald's version.

Jules @ Lovely Las Vegas said…
I approve of the green tea ice cream trend. : ) thanks for these beautiful travel images, including the lovely green ice cream colors. Green tea ice cream desert used to be a favorite of mine as a little one at Japanese restaurants in Las Vegas.

EatTravelEat said…
Jules,
You're welcome! The colors of both ice creams were just wonderful.
May 25, 2015