January 01, 2010
If wishing you a happy new year via the sidebar and the Pelican Hill post was not enough, how about a real Happy New Year post? Welcoming in 2010 was quite different compared to last year. Last year, for me, was a major year of new things, new people, and learning opportunities. Going to a new school as well a summer college class, taking almost 8000 photos, running a blog, using Photoshop, and becoming a DE on Tripadvisor were all things I have never done before. It was also a year of inspirations. Summer brought in the inspiration to write and be more enthusiastic of what I did in life, leading to really different (in my opinion) ways of thinking. To the blog, it meant less quantity, more quality. More descriptions and thoughts. A "this was good" would not just do anymore for me. I don't even get why I was saying that back then earlier during the year, as I am a fanatic of elaborate descriptions. :) And October brought in photography and camera into the works.

The year was all taking in everything that was new and learning, and then applying these new things to life. Previous years had introductions to new things, but never as many as last year. Hopefully, 2010 will be even more invigorating.

Some things about welcoming a new year were different. Such as watching the Rose Parade. Watching back last year's Rose Parade (recorded on the DVR) and then comparing it to this year's coverage was quite different. The parade floats were more astounding this year. I knew of people who were volunteering to make the floats (I could have this week...). KTLA yet featured a different culture, China, this year (before on a past year, India), with a interview with Yao Ming, and footage of the people on the floats on China.

But some things remained the same. Such as long lines at restaurants like Hop Li and Full House, and now, Green Island. Restaurants were crowded with people not only today, but also on New Year's Eve. People were everywhere, enjoying the nice sunny, but mild weather. It was great to see things lighten up after a day of rain and chilly weather. 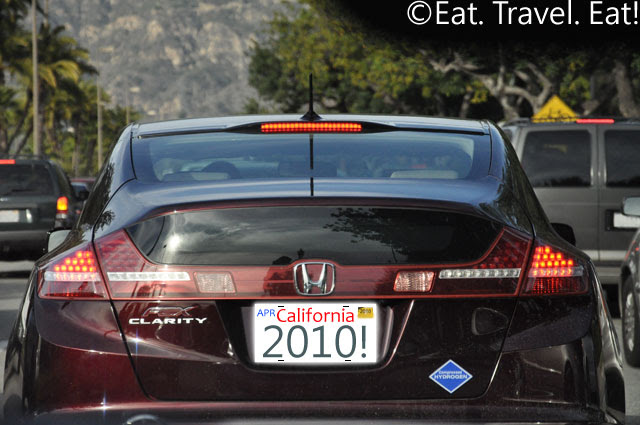 For me, I encountered something new, IN PERSON, today. After a delicious lunch at Embassy Kitchen (post to come on both lunch and dinner), the first restaurant reviewed here on Eat. Travel. Eat!, we were off to look at the Rose Floats. However, look at the photo, and you will see all the traffic we encountered nearby Victory Park. Stopped traffic, with police cars moving everywhere in the opposite direction of where the crowd was wanting to go.

The Honda FCX Clarity Hydrogen Car is, pretty much, old news. If you watched the Rose Parade last year, you saw it already on TV. And it was announced more than a year ago. But seeing someone driving it in person? Definitely something new for me. Yes, there may be all the exotics and the Mini E's, but this was quite different. And since we were stuck in traffic, might as well get a photo. Cool car, new car. You know I like cars already, don't you? (Car event, Pelican Hill)

And might as well enjoy that Photoshopped license plate too. I spent several minutes tinkering with the image. :)

I'd wish I had Rose Float pictures to show you (I would have had plenty if I had volunteered to help with the Lions Club Float or two other floats...), but with the traffic, we turned around. And when we did, the sight was shocking.

Trash. Trash everywhere. If seeing it on TV of Times Square was not enough. Who knew Pasadena would also have its own trash problem? (see pictures if you want HERE and HERE). We left after that. Anyway, one police car was coming at us as I took the pictures, anyway. Not that it mattered. 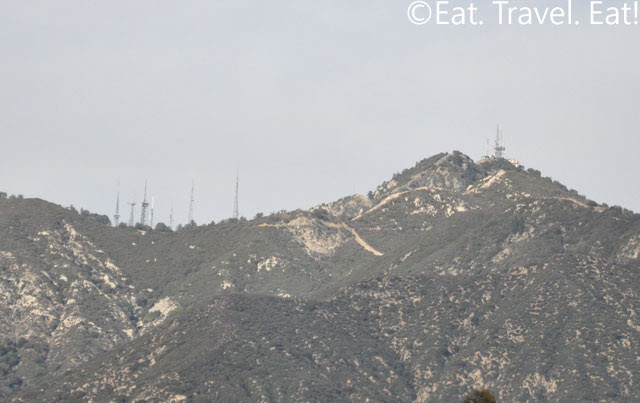 Mount Wilson was quite visible from the 210 freeway, being quite clear. It was also the chance, to really try out something different with Mr. Camera. We are all constantly learning new things, and today was a chance to experience what Ken Rockwell said was good about the D90. Picture controls! 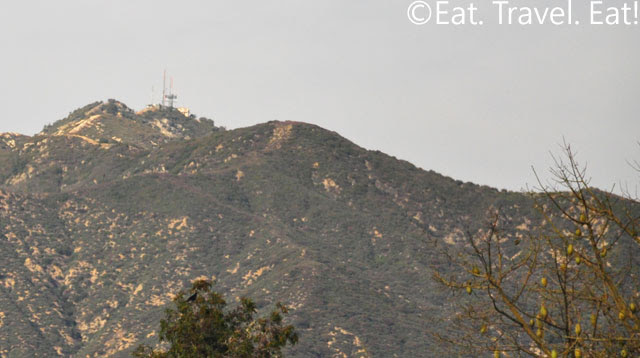 Isn't this photo so much more vibrant and glowing with color? Vivid picture control in the works. :) Too bad, the car was moving, and by the time I was taking this photo, we had moved quite a bit already. You can not see that much left of Mt. Wilson. 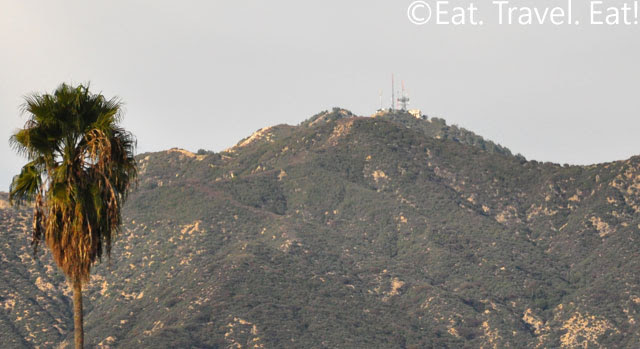 Maybe you would like to see Mt. Wilson with a palm tree. I was, when I was taking this photo.
The rest of the day was low key and relaxing. Watching more Rose Parade re runs from the DVR was quite fun. After all, I was missing out too much already, after the F-18's flew past our house, giving its vociferous sound to all of our local community. Quite fun! Everyone was sure to be awakened after that. :)

Wishing everyone a productive, eventful, and happy 2010. A grateful thank you for reading and your viewership of Eat. Travel. Eat!

Jules at lovely las vegas said…
Happy 2010!! Sounds like the past year was filled with wonderful experiences for growth - hope this new one brings similarly positive experiences. I rang in the new year in Monterey Park, so kind of near your area : ). Enjoyed Griffith Park for the first time and enjoyed good food in the city.

Best wishes with Eat Travel Eat this year and beyond!
January 02, 2010

EatTravelEat said…
Jules,
Thanks for leaving the first comment on my blog for 2010! Hope you are having a great 2010 too. Best wishes to you.

And Monterey Park for New Years? Cool! Haven't been there in quite a while now. Always like to visit there though on the weekends :).
January 02, 2010

KirkK said…
Hi ETE - Man did you have a busy year! Best wishes for another fantastic year.
January 03, 2010

imjustatree said…
happy new year to ya. yea that really is sad with all the littering...

mt. wilson looks interesting...i think i would like to go hiking there sometime since it's somewhat local for me

LisaNewton said…
I started the New Year by taking advantage of the clear skies and viewing the Hollywood Bowl via Mulholland Drive.

EatTravelEat said…
Kirk,
Yep, quite busy, and only getting busier this year! Thanks for the wishes :).

Sawyer,
Littering is just so weird! Luckily Mt. Wilson doesn't get trashed. I've hiked the trail but haven't gone all the way up to Mt. Wilson.

Thanks for the compliment! Will continue to write more posts :).

LisaNewton,
Yeah, New Year's was a great day in California in terms of weather. Awesome day for photos!

Patti at Worth The Whisk said…
Welcome to Los Angeles, now you are showing everyone why we live here - the weather. Sorry about the trash, it's pretty crowded here. Eat well!
January 08, 2010

EatTravelEat said…
Patti,
Definitely the weather! Quite funny about the trash- there was plenty in Pasadena, none in Downtown LA or Arcadia. :)
January 08, 2010

Wandering Chopsticks said…
Is that what 168 means? I always wondered about the supermarket because it seemed like such a random number. Happy New Year! Although, I think we've both wished that to each other weeks ago. ;)
January 27, 2010

EatTravelEat said…
Wandering Chopsticks,
LOL :). Yes, we did already, but it just shows how time passes by so quickly! It's almost February!
January 27, 2010